I doubled back through Iredell County on I-77 and exited on US-70. I crossed into Rowan County on backroads, cresting rolling hills on my search for the lands on which my McNeelys and Millers lived and worked. I came out just east of Mount Ulla, the hamlet that gave its name to the entire district. Finding nothing much to see, I headed toward Bear Poplar and Salisbury on NC-801, also known as Sherrills Ford Road. From the corner of my eye, I spied a cluster of church signs pointing up a side road. “Thyatira Presbyterian” I recognized from histories of early Scots-Irish in Rowan County. And “Mount Zion Missionary Baptist Church, Boyden Quarters” — Boyden Quarters!!! That’s the area that many of my Miller-McConnaughey kin lived in in the early 20th century.  I’d thought they were AME Zions, but decided to have a look anyway. And there they were: 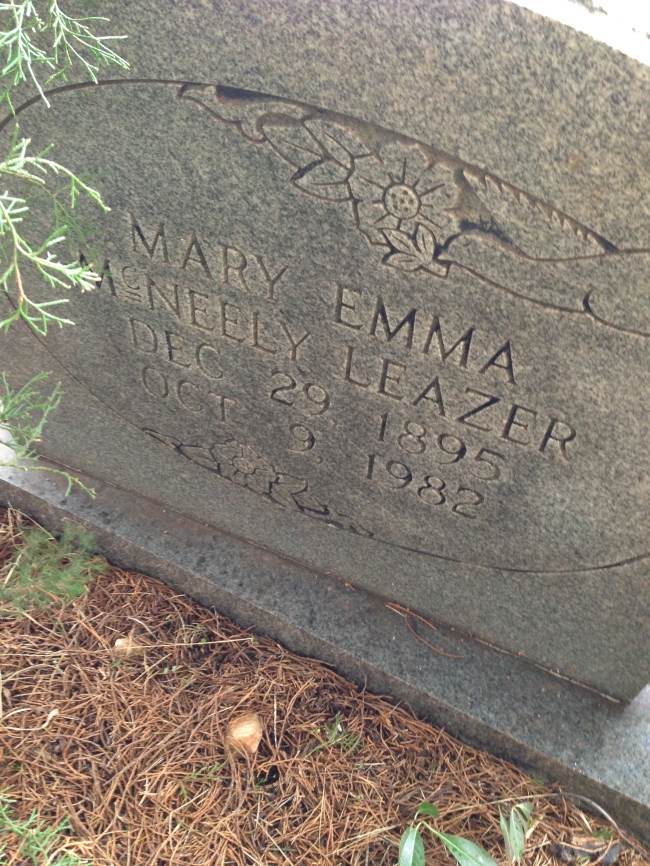 Mary Emma McNeely Leazer, daughter of Joseph Archy McNeely and Ella Alexander McNeely. This stone faces into, and has been overgrown by, a cedar. 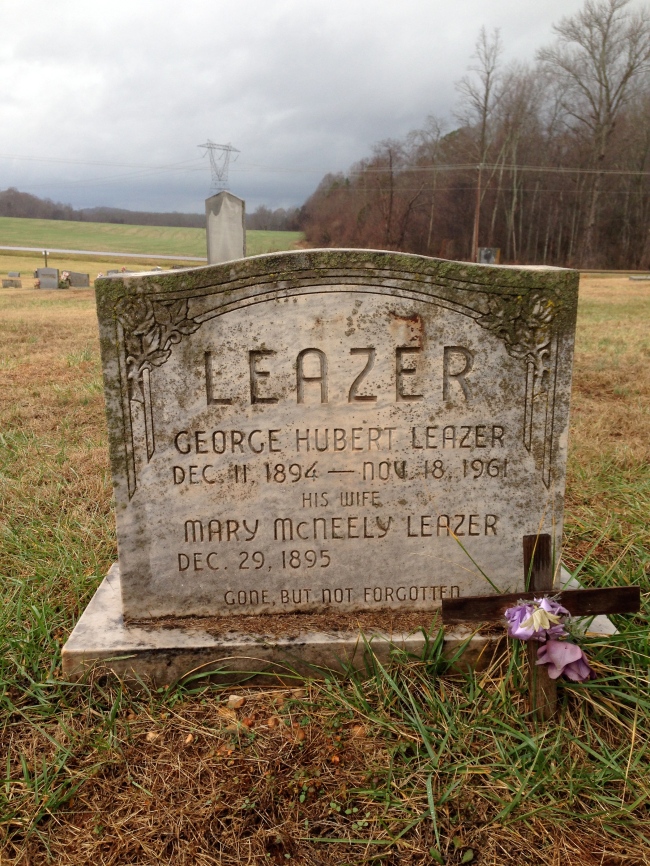 Right next to it is a double stone for Mary McNeely Leazer and her husband George H. Leazer. 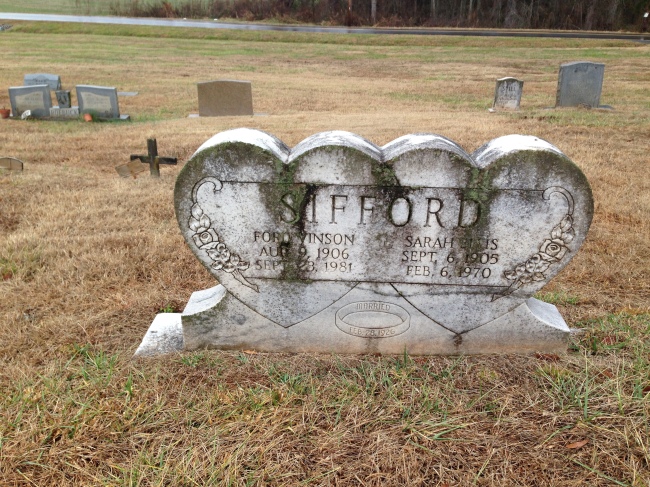 Sarah Ellis Sifford was the daughter of Callie McNeely Ellis and granddaughter of Joseph Archy McNeely.

Lula Mae Aldridge died 16 November 1919 in a state hospital after a battle with mental illness. She was 37 years old. Lula had a few hundred dollars, probably inherited from her father, John W. Aldridge, and her brother John J. Aldridge was appointed administrator of her estate.

Lula was the oldest of John and Vicey Artis Aldridge‘s daughters, and the second to die that month. (Amanda Aldridge Newsome has succumbed to influenza ten days earlier.) Her family spared no expense for her funeral — $140.00 paid to undertaker L.T. Lightner and $80 to Goldsboro Marble & Granite Works for her marker. 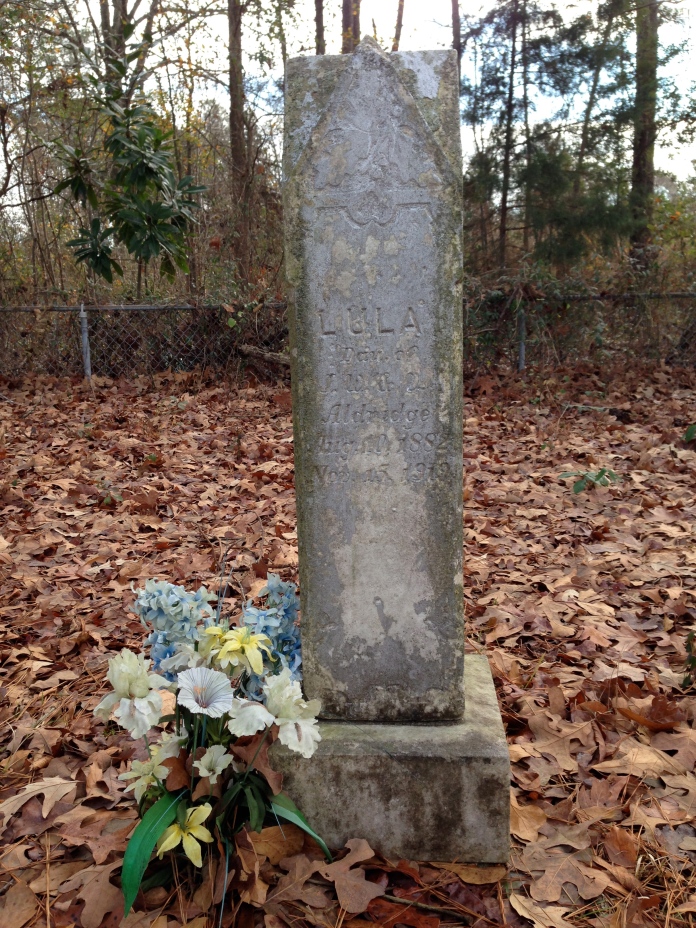 This, despite the considerable debt against her estate, primarily in the form of a $277 judgment against her by William Mozingo.  (What in the world?!? I’ll have to look this up.)  Lula’s brothers John and James Thomas Aldridge and her mother Vicey contributed  $337.95 (about $4600 today) to settle her affairs, and the estate closed in 1923.

I broke my drive home for the holidays with a stop near Greensboro, North Carolina. It rained much of the day, I was exhausted, and I sank gratefully onto the couch at Sister’s. At 88, she’s one of two surviving daughters of my great-aunt, Mamie Henderson Holt (1907-2000). She was the only girl to migrate North and that, plus her enduring beauty, gave her an alluring aura. Here’s one of my favorite photos of her:

Two of Lucinda McNeely‘s sons are accounted for, but what of her older children, John and Alice? 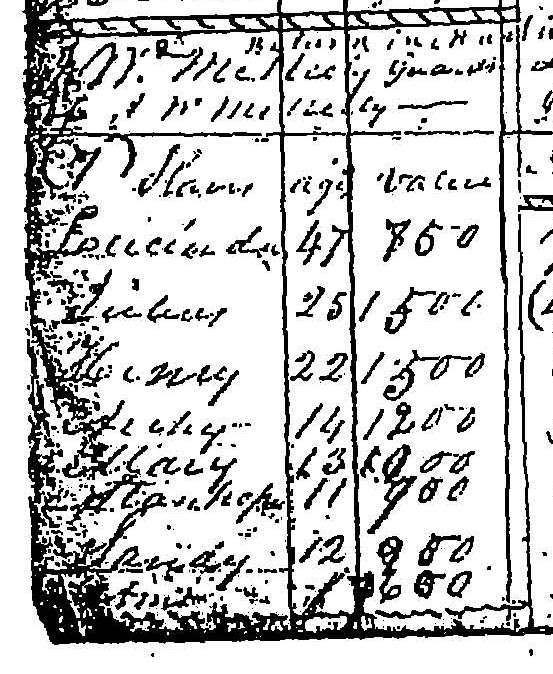 The record for Alice is frustratingly scant. I have found her exactly twice. Once, in the deed filed by Mary Kilpatrick when she sold Alice, Lucinda and John to Samuel and John McNeely in 1834. The McNeely’s slaves seem to have comprised a single extended family — Lucinda, her children, and grandchildren, and the grandchildren probably were all Alice’s.  The four listed in the 1863 Rowan County tax assessment above are Archy, Mary, Stanhope and Sandy.  Alice is not listed and is presumably dead.  (Though, possibly, of course, sold away.)

I have not been able to locate Alice’s daughter Mary after 1863, but in the 1870 census, her sons Sandy and Stanhope appear in their uncle Julius McNeely‘s household as Alexr. and John S. This is the last record I have of either.

Some years ago I decided that Lucinda’s son John was John Rufus McNeely, generally called Rufus, who died 1870-1880 in Rowan County. He married Emeline Atwell about 1855 and was father of five children: Mary, Betty, Charley, Henry and Rufus Alexander McNeely. John’s absence from the 1863 list mystifies me, though, and I’m not sure how I came to this conclusion. For now, I’m withholding sanction.

UPDATE, 26 January 2014: John Rufus McNeely’s 1866 cohabitation registration noted that he was the former slave of John W. McNeely. As the rest of J.W.’s slaves comprised a single family, I renew my conclusion that John Rufus was Lucinda McNeely’s son.

The second in a series of posts revealing the fallability of records, even “official” ones.

The “true facts”: Richard Artis Sr. was born about 1850 in Wayne or Greene County to Vicey Artis and Solomon Williams.

First of all, poor penmanship — a “bad hand,” as my grandmother would have said — will do you in. Based on that misshapen “S,” Ancestry.com has indexed this document as the death record of Richard Artis Jr.  In fact, Junior was the informant, and his “J” is unambiguous. This is Richard Senior’s death cert.

Second, Richard’s father was certainly named Solomon, but not Artis, as unhelpfully pencilled in.

Third, Richard’s mother’s name is illegible, which is just as well, as it surely does not say “Vicey Artis.” 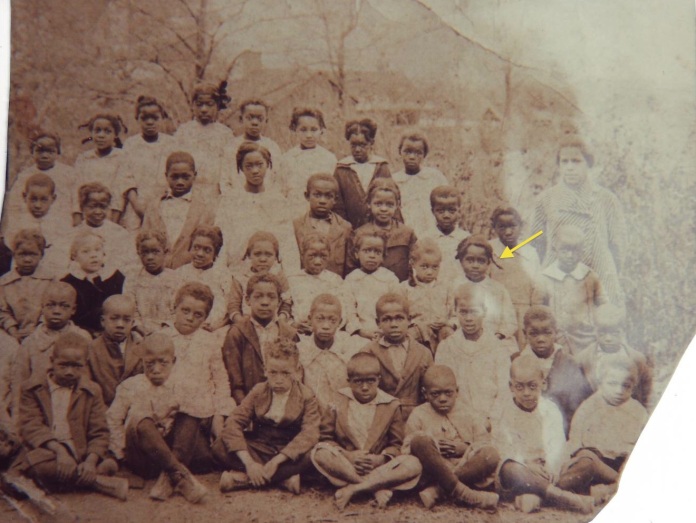 Me:  Aunt Launie Mae was a mama’s baby?

My mother:  I thought Aunt Launie Mae looked more like Grandma Carrie than anybody. She looked the most like of her all the sisters.

Remembering my great-aunt LAUNIE MAE COLVERT JONES (1910-1997) on her birthday.

Tuberculosis, once also called phthisis, is a common, and in many cases lethal, infectious disease caused by various strains of mycobacteria. Tuberculosis typically attacks the lungs, but can also affect other parts of the body. It is spread through the air when people with an active TB infection cough, sneeze, or otherwise transmit respiratory fluids through the air. The classic symptoms of active infection are a chronic cough with blood-tinged sputum, fever, night sweats, and weight loss (the latter giving rise to the old term “consumption.“)  Tuberculosis has been present in humans since antiquity.  Tuberculosis caused the most widespread public concern in the 19th and early 20th centuries as an endemic disease of the urban poor and was the leading cause of death in many cities in the early 1900s. By mid-century, the development of the antibiotic streptomycin made effective treatment and cure of TB a reality.

In memory of members of my extended family who succumbed to this disease:

Me:  And where was the area that was called Wallacetown?

My grandmother:  Mm-hmm. That was just out near where we lived. We lived out there.  And then there was like a stream or a branch or something where you crossed that thing, that was called Rabbittown.

Grandma: We lived in Wallacetown.

From the 1916 city directory of Statesville, North Carolina:

Popular Branch — a colored settlement southeast of Wallacetown [actually, it was “Poplar” Branch]

Wallacetown — a colored settlement southeast of the railway station