I saw that big, block of a white house, but I didn’t know what I was looking at. And, really, I wasn’t even much looking at it, because my whole attention was zeroed on a small building a couple hundred feet beside and behind it. A one and-a-half story log cabin sitting on fieldstone piers, mud-chinked, with small windows in the gable ends and central front door. In pristine condition. What was this?

I turned to P.P., who shifted uncomfortably in her seat. “I don’t even want to say this,” she started, “but it’s true. It’s just so ugly.”

“Well, the official story is that’s where the Daltons lived while they were building the house.”

The house — oh. This was Daltonia. 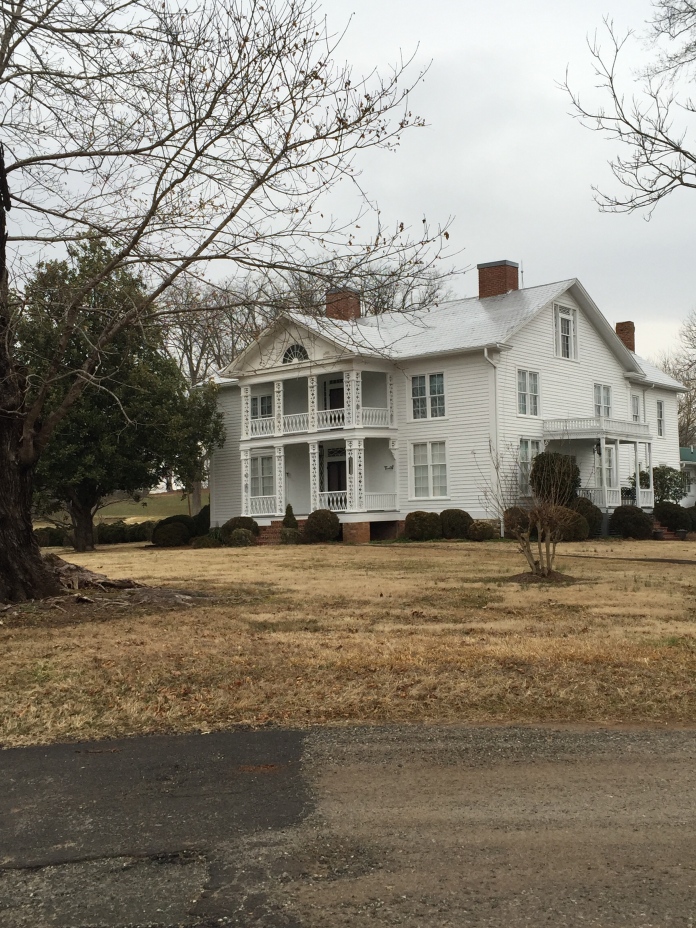 Wait. “Anse Dalton!? Anderson Dalton? That was — he was the father of my great-grandfather Lon W. Colvert‘s first wife, Josephine.”

“Yes, well, after the War, he was a driver for the Daltons. But in slavery …”

I sat with that for a minute.

“It’s terrible,” she continued. “They thought, just like you can disposition an animal, you could breed people with certain traits. He had I-don’t-know-how-many children.”

I knew about slave breeding, of course. About the sexual coercion of both enslaved men and women, particularly in the Upper South. I’ve read slave narratives that speak of “stockmen,” but never expected to encounter one in my research. I thanked P.P. for her openness, for her willingness to share the stories that so often remain locked away from African-American descendants of enslaved people. Not long ago, I started working on a “collateral kin” post about the Daltons. I knew Josephine Dalton was born about 1878 to Anderson and Viney (or Vincey) Dalton; that her siblings included Andrew (1863), Mary Bell (1876), Millard (1880), Lizzie (1885) and Emma (1890); and that she was from the Harmony/Houstonville area. I’d stumbled upon articles about Daltonia and had conjectured that her parents had belonged to wealthy farmer John Hunter Dalton. I’d set the piece aside for a while though, because I had no specific evidence of the link beyond a shared surname. However, here was an oral history that not only placed Josephine’s father among Dalton’s slaves, but detailed the specific role he was forced to play in Daltonia’s economic and social structure.

P.P. did not know Anse Dalton, but Anse’s son Millard and her grandfather had grown up together. P.P. was reared in her grandfather’s household and vividly recalled Millard Dalton riding up to visit on his old white horse. “You can have her till I go home,” he’d tell her as he handed off the reins.

I can finish my Dalton piece now. Though I will never know the names of the children that Anderson fathered as a “stockman,” genealogical DNA testing may yet tell the tale, and I have a clearer picture of Josephine Dalton Colvert’s family and early life.

Yesterday was the 150th anniversary of Congress’ passage of the Thirteenth Amendment, which abolished slavery in the United States. On Facebook, several friends posted links to sites featuring “never-before-seen” photographs of formerly enslaved Americans, most taken in the 1930s. As I clicked through these images, struck by the strength and endurance embodied, I had a sudden thought — I’ve got a few photos of former slaves, too. And they’re my own people. 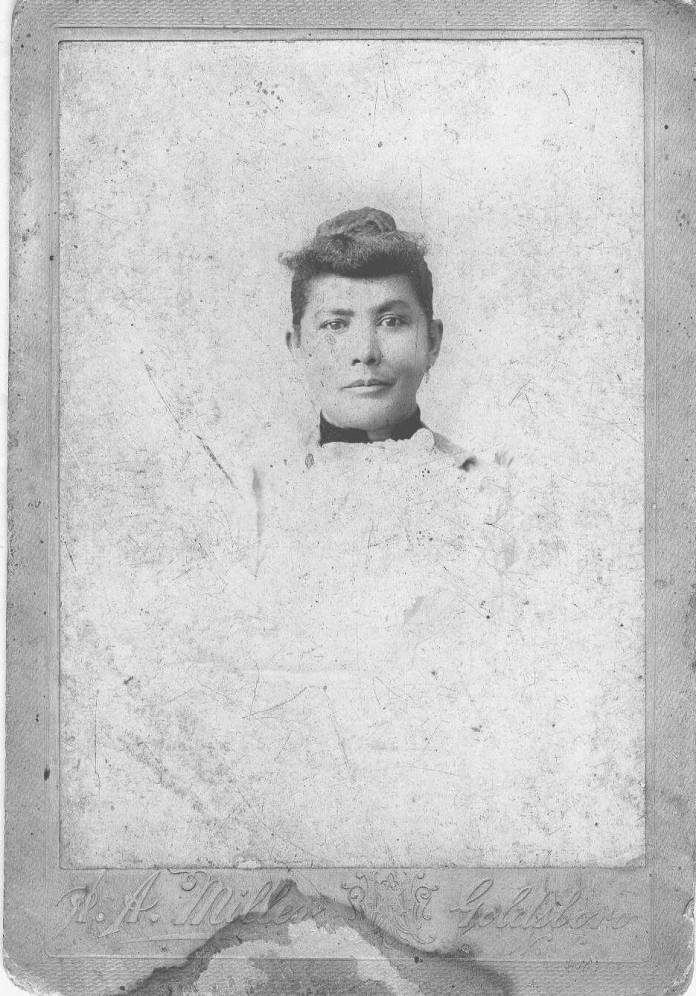 In tribute to these and countless others, known and unknown, who walked through this country’s darkest days.

An ongoing memorial to my enslaved ancestors and the communities in which they lived.

I’ve been working on my Book of Negroes post, digging in my Family Tree Maker files and through scanned documents, cross-referencing and making notes. At the top of the list of enslaved ancestors is Juda, a woman named in the 1819 will of Elizabeth Kilpatrick of Rowan County, North Carolina. Kilpatrick left her “negro boy Dave” to her son Robert Kilpatrick, her “negro girl named Lucinda” to her daughter Mary Kilpatrick, and directed that her executors sell her “negro woman Juda and all her children (not disposed of).” There are gut-punches all through this document — Lucinda was my great-great-great-grandmother — but that last one always tears me all to pieces. Put it all together, and you see that Kilpatrick owned one family of slaves — Juda and her children — and she directed that that family be ripped apart upon her death.

Elizabeth Kilpatrick’s will was devastating enough. And then I found her 1829 estate records. There, in faded script is the last sighting of Juda and her not-disposed-of children, Matthew, John, and Kezy. It’s damnably hard to read, but if you peer closely: Negroes Juda $50 Matthew $425 John $2[illegible]0. And below, a notation: Kezy Unsound Not sold by consent of Heirs Remains in the hands of [illegible]. (Another note in the file records a change of heart — on 20 October 1830, Kezy was, in fact, sold for $74.75.) I don’t know how old Juda was when she was sold away from her children in 1829, nor Matthew, John, Kezy, or Dave, but Lucinda was about 13.

Working on my DNA Definites Neill piece sparked an idea for a running post. Sort of my own Book of Negroes. A list of (1) enslaved family members and (2) the enslaved people owned by my family members. I thought briefly about who might make the list, then relegated the idea to “to do.” And then last night —

I ran an idle Google search for “Iredell County slavery.” At the top of the third page of results, I ran up on this: a bill of sale for two slaves, Peter, aged 22, and Flora, aged 12, sold by my great-great-great-great-great-grandfather James Nicholson to Robert S. Gray on 15 October 1829. 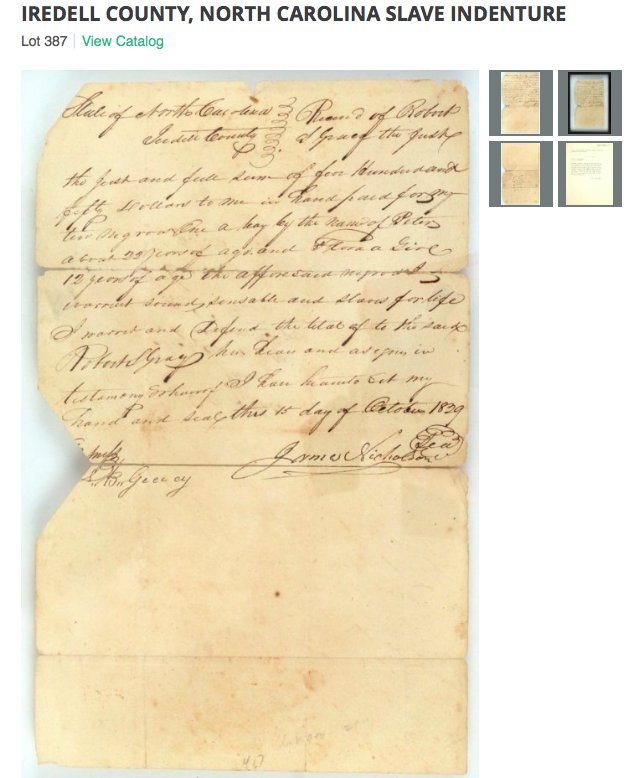 Lot 387. Yes. This document was included in a list of items in an on-line estate auction conducted November 16, 2014. I am two months too late. The bill of sale sold. And probably for more than Robert Gray paid for Peter and Flora.

And so I got up this morning and started my Book of Negroes. The format is eluding me, but I’m compiling the entries. The ancestors have called, and I’m answering.

“The Old South, like any other long-vanished society, is distant from us, and strange. The more we learn about it, the more we realize we do not know. If the story of free Afro-Virginians in Prince Edward County teaches us anything, it is the danger of making assumptions about that past and its people based on what we see around us today, or on what we think we know about the history of other periods, or on the hubristic notion that our own society is superior to theirs in every conceivable way.”

At 619 pages, this is not light reading. But may I strongly recommend to anyone with the least interest in 19th century, southern, or African-American history Melvin Patrick Ely’s Israel on the Appomattox: A Southern Experiment in Black Freedom from the 1790s through the Civil War. It’s a richly detailed, scrupulously documented, compellingly limned history of Israel Hill, a community of freed slaves in southern Virginia.

Green Street cemetery, Statesville, North Carolina, abloom in buttercups.  Though largely empty of headstones, this graveyard is probably close to full.  Most of the existing stones, including that of my great-great-grandfather John W. Colvert, date from 1890-1930 — ex-slaves and their children.  For some, it is the most detailed record of their lives.  One: MARY WILLIAMS passed away Mar. 13, 1917 in her 94th Year Blind cheerful her simple faith was an inspiration Rest in peace Aunt Mary.