I couldn’t sleep; I hadn’t adjusted to the night sounds of Guatemala City. So I logged into Ancestry.com, and:

My great-great-grandfather Henry W. McNeely taught for a few years after Freedom and surely could read and write. His wife Martha, despite her transparent assertions otherwise, could not. Their children received educations that they had been denied, and when Henry’s brother Julius died without direct heirs about 1913, all signed off on the distribution of his estate. (All except Addie McNeely Weaver, who had recently passed.)

My grandmother’s mother’s family often sought the warmth of other suns, and by 1940 all of her aunts and uncles had left North Carolina. In consequence, I did not grow up knowing my McNeely kin, but I often heard wonderful stories of them. My grandmother treasured all her aunts, but had a special regard for Emma McNeely Houser, who migrated to Bayonne, New Jersey, around the time my grandmother was born. All three of Emma’s children have long passed away, and she had only a handful of grandchildren. Just over a year ago, I traveled to Augusta, Georgia, to meet her son Henry‘s middle son Melroy Houser. I wrote here of my visit, which was filled with reminiscing and easy laughter.

I received word from one of his sons that Cousin Melroy passed this morning. I wish that I had gotten to know him better, but will always cherish those hours on a warm May afternoon. My deepest condolences to his children, who, like me, carry a legacy as McNeely great-grandchildren.

An Easter card for my grandmother Margaret Colvert Allen from her aunt, Minnie McNeely Hargrove, circa 1970.

Jay as a boy, probably in Bayonne, New Jersey.

On the 65th anniversary of her death (and her brother Edward‘s), another account of the terrible death of my grandmother’s aunt, Elizabeth McNeely Kilpatrick Long:

My grandmother: I had another cousin that died. A man named Jay. He was Aunt Elethea’s boy. She died when I was about 12 years old, I think. Anyway, she died, and she had three sons.

Me: That was Jay and Charles and William.

My grandmother, looking at a photo: Now, who is that?

In 1942, Charles Edward McNeely filed for a delayed birth certificate in Iredell County. The document issued by the Register of Deeds reported that he was born 15 Jun 1904 to Eleather B. McNeely. No father is named. I have not found a birth certificate for Charles’ brother William “Bill” McNeely.

In the 1910 census of Statesville, Iredell County, on Salisbury, three little boys surnamed McNeeley were listed in the household of their grandparents, Sam and Mary Steelman. William was five, James was three, and Charlie was two. I once was pretty sure that these were Elethea’s boys, but I’m pulling back. Charles and Bill appear nowhere else in the census, but the ages of these boys are off. And who is James? (He’s not Jay/J.T. — Irving McNeely Weaver — whose father was Archie Weaver and who was not born until 1911 or 1912.)

I’ve found none of Elethea’s sons in the 1920 census, though they were probably living in their grandmother Martha McNeely‘s house in Statesville with their mother and aunts Minnie and Janie McNeely:

On 23 May 1926, Charles Edward McNeely, 22, married Willie Ann Davidson, 18, before witnesses Mary Louise Colvert, Levi Moss and Bertha Mae Hart. Louise, my grandmother’s older sister, was his first cousin. Bertha was the half-sister of my grandmother’s father. Charles listed his parents as Ed Stockton (living) and Letha McNeely (dead.) John Edward Stockton (1881-1955) was born in Iredell County to Alfred and Caroline Kerr Stockton. He was working as a bellhop at the Hotel Iredell at the time of Charles’ birth. I don’t know whether he was also Bill McNeely’s father. 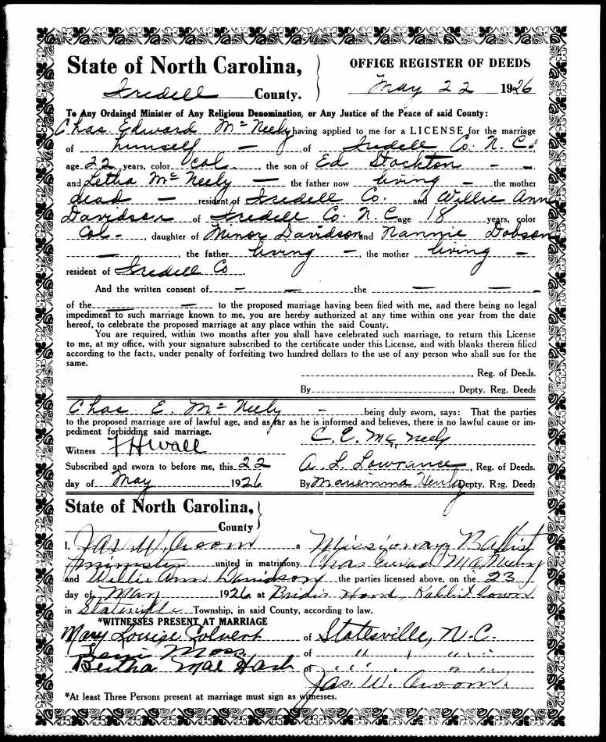 Charles and Willie Ann’s marriage apparently did not take. In the 1930 census of Manhattan, New York County, New York, Charles M. McNeely, 26, and Willy M. McNeely, 22, were listed as boarders in household headed by Lucy R. Reid.  Both were North Carolina-born and reported being married, though their wives were not enumerated with them. Charles worked as a machine operator in a mayonnaise factory and Willy as an elevator operator in a private house.

In 1940, Charles McNeely was still in Manhattan, but I lose sight of Bill.  Thirty-six year-old Charles lived at 308 W. 127th Street, a lodging house run by Lillie Collins. He gave his occupation as steamship laborer.

Charles McNeely, resident of north Harlem, died 1 Apr 1968.  Four and a half months later, on 15 August, Bloomfield, New Jersey, resident William M. McNeely passed away. This William, however, was not Bill, but a son of William E. and Sarah L. McNeely. I have no evidence that either Charles or Bill had children.

Most of my grandmother’s male McNeely first cousins were too old to have served in World War II. They were required to register nonetheless, and the draft cards I’ve found offer interesting little snapshots of their lives: 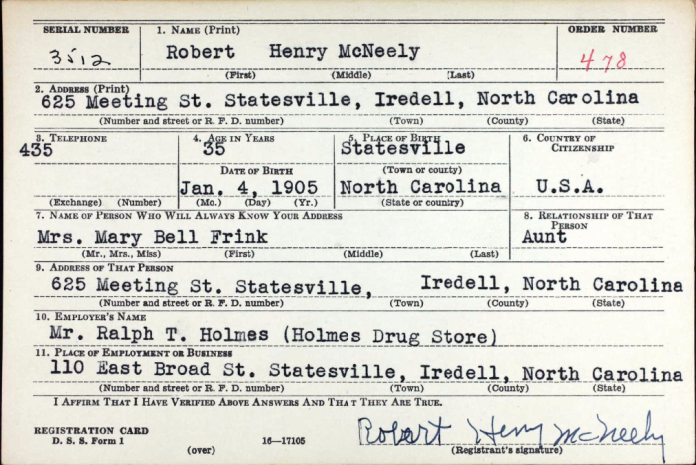 The scars on Robert Henry “Jinx” McNeely‘s head were external evidence of the skull fracture he received when his bicycle collided with an automobile in 1937. His aunt, Mary Bell Woods McNeely Frink, was his mother Margaret Woods McNeely’s sister, but she was also his stepmother, having married (and divorced) his father Luther McNeely after Margaret’s death. She is an interesting choice for “person who will always know your address,” as, as far as I know, Jinx’ wife Katie Woodsides McNeely was living at the time. Jinx started working as a drugstore porter, making customer deliveries and running errands on a bicycle, in his teens. 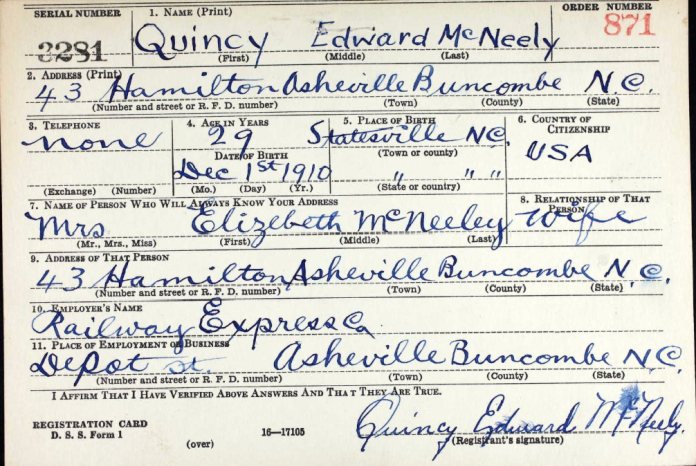 Though he was close to her age, my grandmother never knew her uncle Edward McNeely‘s son Quincy. Ed and his wife, Lucille Tomlin McNeely, divorced early, and by 1920 she and their son had moved 100 miles west to Asheville, North Carolina. Quincy married Addie Sims in 1930, then Elizabeth [last name unknown] by 1935. He does not appear to have fathered children, and he died in Detroit in 1966.

I’ve written of James “Red” McNeely alias Smith here. He was the cousin closest in age to my grandmother, but I heard her mention him only once. After their mother Addie McNeely Smith‘s death, aunt Minnie McNeely reared James and his older sister Ardeanur. He moved to High Point, perhaps in his early 20s, and may have been briefly married to a woman named Mildred.  (They appear together in the 1930 census of High Point, but I haven’t found a license or anything else about her.) It did not last, and he had no children. Red was a pool room operator and died in 1960.

This really wrecks my notions about when the Columbus, Ohio, branch of my McNeely family really put down roots in that city. The card shows that in 1942, 19 year-old Carl Taylor was living in Statesville — in the household of his first cousin, Louise Colvert Renwick — but his mother Janie McNeely (not Taylor?) was living in Columbus and working at a Children’s Home.  My inability to find Janie’s family in the 1940 census makes it difficult to pinpoint when she migrated north. In any case, she apparently moved back and forth between North Carolina and Ohio during the 1930s before settling permanently in Columbus, perhaps during the War.

My first question: why have I just found this 1940 census entry today?

Her age is way off — Ardeanur was 37, not 47 — but this is definitely my great-great-aunt Minnie McNeely, my grandmother’s first cousin Ardeanur Smith Hart, and Ardeanur’s mysterious husband Frank living right in Jersey City, the city next door to Bayonne (where Martha Miller McNeely and most of her children lived for greater or lesser stretches of time.) The address was 359 Pacific Avenue. A family of McKoys rented one apartment in the building, and the Harts, Aunt Minnie, and a William Macklin shared another, splitting the $30/month rent. Frank Hart, a naturalized citizen, worked as a butler in a private home and reported earning $500 in 1939. Ardeanur and Minnie were housekeepers in private homes earning $400 and $360 respectively. Macklin, an insurance agent, earned more than everybody else in the flat combined — $1700.

I still don’t know when Ardeanur married Frank Hart, but they reported that they’d been living at the same address five years before. This suggests they were married before 1935.

I don’t see Frank in earlier census records, but is this his arrival in the U.S. in 1922?

If so, did he leave his first wife back in Jamaica, or maybe Cuba?

359 Pacific Avenue, Jersey City, as seen from Google Street View. Per Zillow, the building was built in 1901.