No mystery why I didn’t find this earlier. Jonah Wiggins? No, actually, Jonah Williams, brother of my great-great-great-grandfather Adam Artis. And though I knew Pleasant Battle was from the Battleboro area, I don’t think I’d ever searched Edgecombe records for their marriage license. 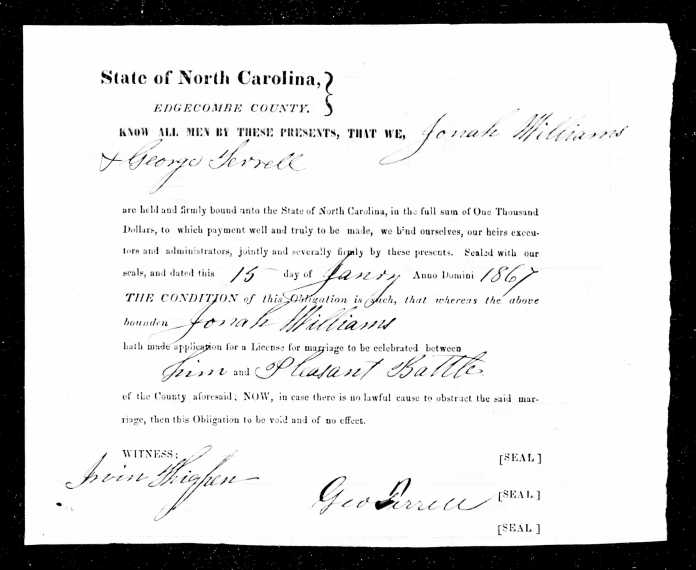 I don’t know who George Terrell was to Jonah. He and his wife Martha Lindsey, who married a few days before Jonah and Pleasant, appear in the 1870 census of Cokey township, Edgecombe County.

And here’s the marriage license. I am a little surprised that Jonah was married by a Justice of the Peace, rather than a minister of the gospel, but perhaps he was not yet the man he would become: 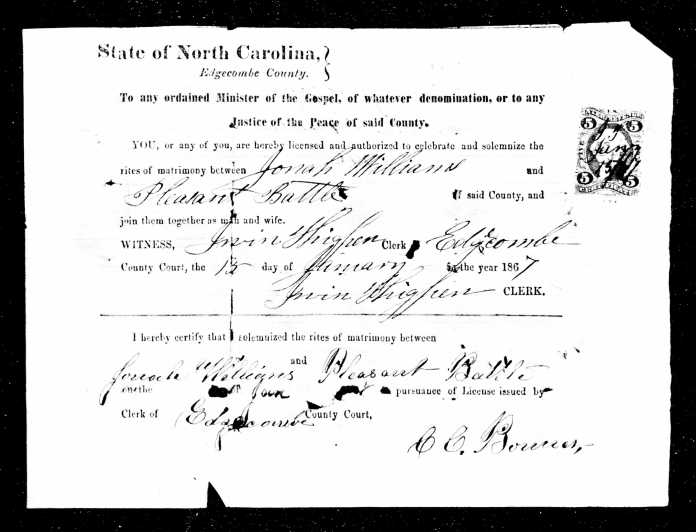 A few weeks ago, I ran across a reference to Joel Craig and Sharlene Baker’s As You May Never See Us Again: The Civil War Letters of George and Walter Battle, 4th North Carolina Infantry (2004). George and Walter were sons of Amos Johnston Battle, a prominent (and peripatetic) Baptist minister who spent his last years in Wilson County.  I wondered if the brothers mentioned any of the family’s slaves in their letters, so when I was at home I stopped by the Wilson County Public Library to skim their copy.

I found only a single reference to a Church, presumably enslaved, who was charged with delivering certain items to the letter writer. A footnote appended to the passage states: “The boy ‘Church’ has been referred to by some as one of the Battle’s [sic] slaves. Whether this is referring to the Raleigh Battle’s or the Wilson Battle’s is unclear. However, if the Rev. Battle did own slaves in the midst of the war it might mean that he was not the abolitionist as previously thought.”

Two things struck me: (1) given Hugh B. Johnston’s confident identification of Amos Battle as the owner of my ancestor Cherry, was his possession of slaves a question? (2) “abolitionist” is a mighty strong word to describe anybody coming out of Wilson County.

First, I did what I’ve apparently never bothered to do — check the 1850 and 1860 federal slave schedules for Amos J. Battle. He appears in neither, but his wife Margaret H. Battle is listed with 32 slaves in 1860. (Hugh Johnston noted that Amos Battle’s “wife owned a small farm north of Wilson not far from the Barnes plantation.”) She is not listed in the 1850 slave schedule, and the sudden acquisition of that many slaves suggested inheritance. After figuring out her maiden name (Margaret Hearne Parker) and father’s name (Weeks Parker) I went looking for estate records.

Sure enough, Weeks Parker died in January 1844 in Edgecombe County, leaving a widow and three children. (One predeceased him.) The 88 pages of his estate file span more than a decade, and Emancipation eventually intervened to prevent a final distribution. There was this, though, a listing of those slaves apportioned to daughter Margaret H. Battle and her children, apparently dating from the late 1850s:

Weeks designated son Simmons as his executor and trustee. He bequeathed certain slaves — Polly, Godwin, Old Ned, Winny, Hardy, Charlotte and her child Cintha, and Nelly —  to pass to Simmons after wife Sabra’s death, and mentioned that he had already given Simmons 14 slaves in a deed of gift. He also directed Simmons to sell the land and slaves in Florida inherited from son John’s estate. (And tweaked this last provision in a codicil.)

Weeks’ bequests to his daughters are curious though.  After Sabra’s death, Simmons was to hold in trust slaves Lucindy, Stephen, Turner, Lewis, George, Marina, Tony, Matilda, Caroline, William, Holly, Big Hardy, Ben, Cena, Moses, Syphax, Little Hardy, Jim, Lucy and Little Jim “for the sole and separate use and benefit of daughter Margaret H. Battle wife of Amos J. Battle during her natural life free from the management and control of her present or any future husband.”  Similarly, he directed that Simmons hold in trust after Sabra’s death slaves Barbara, Sarah, Luke, Ned, Sophia, Elick, Harrison, Milly, Jeffrey, Dorcas, Silas, Bill, Lou, Julia, Randal, Will and Abner for the benefit of daughter Henrietta Battle. Why the specific attempt to keep Amos Battle’s hands off his wife’s property? Was he in fact an abolitionist likely to try to free them? Or were Weeks’ concerns more prosaic?

Simmons and his mother went into court to have Weeks’ will admitted to probate, and the skirmishes began. The two sets of Battles teamed up to claim that they had not been notified prior to probate and that the will’s codicil had been made under undue influence. Simmons and the other trustees admitted that Battles may not have been given formal notice, but claimed that they knew anyway. They also charged Amos Battle with having taken a slave named Jim to Wilmington.  The Battles fired a second volley with a claim that Simmons was in “extreme bad health” and “great physical inability” and “utterly incapable of carrying out his duties” as a trustee. Simmons responded meekly, acknowledging that he had been shot in the chest many years before and had never recovered, a circumstance that sometimes completely debilitated him. He agreed to surrender his trusteeship. Nathan Matthewson, too, stepped down, and was replaced by Benjamin Oliver of Duplin County. In one of Oliver’s reports, he advised the court that he had sold for $600 a slave named Jim “in consequence of grossly bad behavior and general bad deportment.” The buyer was Wyatt Moye. With the funds received, Oliver then spent $500 to purchase Lilah from a Dr. Arrington. (She later gave birth to a son Charles.) In 1849, Oliver moved to Bladen County and resigned his trusteeship; Uriah Vaughan of Hertford County — where Margaret then lived — was appointed in his stead. In the mid-1850s, Margaret, Amos and their children moved to the town of Wilson, where Sabra Parker bought them a house and lot. In another plaintive petition for yet another trustee, submitted in September 1856, Margaret complained that she had no other property and that the family was “dependent on their own exertions for a support” as their trust fund was inadequate. The younger children were chiefly supported by Margaret’s “exertions” [she was an innkeeper], while the creditors of her husband Amos, “who is greatly embarrassed,” tried to take her earnings at every opportunity.

Another source shines light on the Battle family’s financial situation. In 1911, Amos and Margaret’s youngest son, Jesse Mercer Battle, published memoirs titled Tributes to my Father and Mother and Some Stories of My Life. In the chapter on his mother, he recalled that his “mother’s family lived in Wilson, N.C. We lived in a large house, and it was called ‘The Battle House.'” There, to her humiliation, his mother took in boarders and other passers-through to earn money for the family’s keep. His father, though “rich in lands and negroes,” gave away his wealth to the point that his younger sons’ educations were neglected. The chapter on Amos J. Battle goes further. Amid fifty hagiographic pages limning his father’s Christlike-ness, Jesse reveals that “his money, his lands, his negoes, his stocks, his bonds, his personal property of every description went as his free will offering to the Church as a whole, and to anyone of its members individually, or to those who were not members.” (This was not offered ironically, and there is no attempt to square Battle’s slaveholding with his Christian values.)

Ah. So. And therein lies the motive for Weeks Parker’s determined attempt to keep his wealth out of pious Amos Battle’s hands.

Jesse Battle’s memoir also provides a peek at the family’s slaves and demonstrates that the thirty or so inherited from Weeks did not define the extent of Margaret’s holdings. “Negroes were my companions,” he wrote. “I played with them, and spent my time with them all day, till I was about seven years old, when I was started to school. I knew my alphabet and how to read a little. This start on my way to an education was given to me by a good old colored woman I called Mammy. (Her name was Dinah.) … This good woman remained with our family till 1865, when the Civil War ended, when she left us and moved down to Greenville, N.C., where her husband, whose name was ‘Shade,’ lived. After the emancipation of the slaves she said that she could never enjoy her ‘freedom’ as long as she lived with her master and mistress.”  [Three cheers for Dinah!] Jesse elsewhere mentioned that Dinah had lived with the family at a farm called Walnut Hill, “about three miles from Wilson N.C., on the railroad toward Rocky Mount.”

In the end, I still don’t know if Hugh B. Johnston was correct about Cherry Battle Barnes’ ownership, but I have confirmed that Amos J. and Margaret Hearne Battle owned slaves and that some of those slaves worked on a farm just north of Wilson, not far from where Cherry lived at the time of the first post-Emancipation census.

Rachel Taylor was born about 1863 in Wilson County, most likely between the town of Wilson and what is now Elm City. Records consistently name her mother as Cherry Battle, or Barnes, but a single entry renders her father’s identity is more ambiguous.

In 1866, Willis Barnes and Cherry Battle legalized their relationship by registering their cohabitation in Wilson County. They informed the registrar that they had been married six years. In the first post-Civil War census of 1870, Rachel Barnes is the oldest child, at 6, in their household.  Three younger children follow: West, Jesse and Ned.

However, in the 1880 census, the family appears as: Willis Barnes, wife Cherey, stepdaughter Rachel Battle, children Wesley, Jesse, Ned, Eddie, and Mary Barnes, niece Ellen Battle, and son Willey Barnes.  “Stepdaughter”?  Rachel appears to have been born after her parents’ marriage in 1860, and this is the only reference I have found that assigns her the surname “Battle.” She married in 1882 as “Rachel Barnes” and is listed as Rachel Barnes on several records related to her children. When she died in 1925, a month after suffering a stroke, her son named Willis Barnes as her father.  Was the 1880 censustaker merely mistaken? Misinformed?

I was new at research and utterly clueless about where to start looking for information about slave forebears when I reached out to the late, great Hugh B. Johnston, Wilson County’s pre-eminent historian and genealogist. I was thrilled to receive his prompt reply. The letter was brief, but encouraging, and though I’d hoped for a complete and annotated report that left no end loose, I was confident that a breakthrough loomed just around the bend.

Unfortunately, here I am, nearly 27 years later, with the same fundamental questions burning: