April 1998. I’d been a member of Wilson County Genealogical Society perhaps six months. The group’s Colonial Roads Tour felt like something I couldn’t miss, so I made a special trip home to board a bus that would introduce us to Wilson County’s earliest past. The late, great Henry Powell narrated, identifying and illuminating obscure landmark after obscure landmark as Wilson County’s backroads unspooled beneath the bus’ wheels. For the first time, I began to understand Wilson as a palimpsest created not just by time, but by race and class. There were whole layers of culture and memory and history accessible only to those who had inherited the right keys. The keys I had unlocked none of these doors. But they did grant access to the Society.

From the beginning, I was welcomed into the group — encouraged, consulted and listened to. WCGS’ efforts to be inclusive have been organic and sincere, and I have appreciated the opportunity to be a resource for others in and out of the group. Living in Atlanta means that I’ve only attended a handful of the Society’s Tuesday night meetings, but over the years I’ve been able to contribute dozens of articles to its excellent newsletter.

This week I again came home just for a WCGS event. Tonight, at the Society’s invitation, I used my keys to open a door to Wilson County to which few society members have access. My presentation touched on slaves and free people of color and segregation, but was focused on the awesome life of one of Wilson’s “lost” sons, my cousin Dr. Joseph H. Ward. After I set my nerves aside, my talk went well, eliciting thoughtful questions and positive comments at its conclusion. 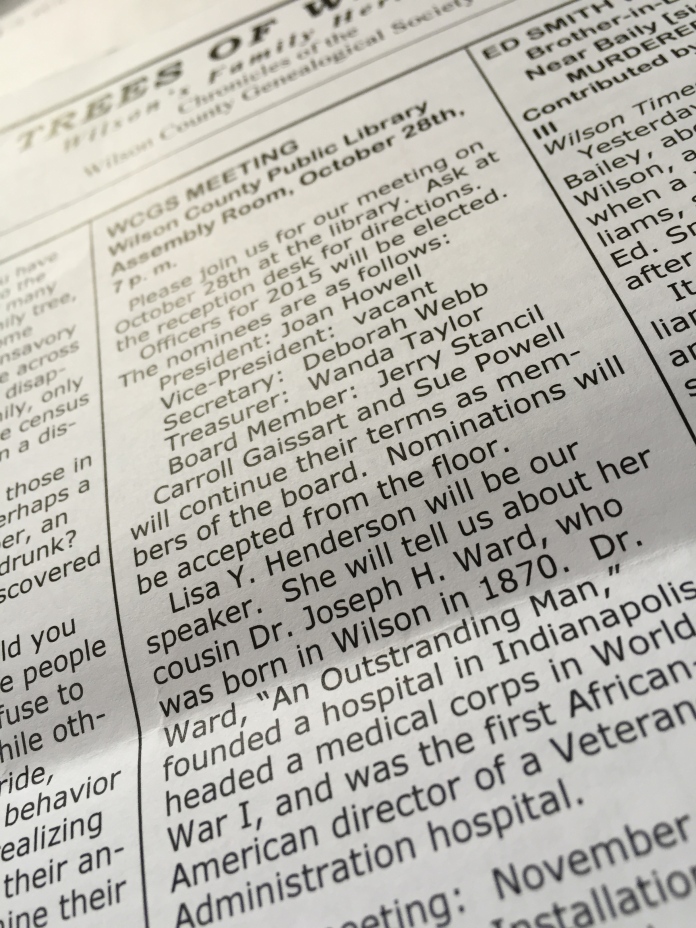 I thank Wilson County Genealogical Society for the opportunity to give back to a community that has encouraged and supported my research for 17 years. And I thank the little fan club that came out to support me — my parents; Mrs. L and Mr. and Mrs. M, who have been surrogate parents all my long life; and a couple of staunch childhood friends. After the program, I spoke by phone with Cousin Joseph’s great-granddaughter, who is named after his beloved wife. One of the joys of my recent research has been being able to fill in the blanks in her ancestor’s early life, and she and her mother hope to visit his birthplace soon.