The fifth in an occasional series excerpting testimony from the transcript of the trial in J.F. Coley v. Tom Artis, Wayne County Superior Court, November 1908.

I had a conversation with Napoleon Hagans about this land, the 30 acre piece. (Plaintiff objects to question and answer.) I got after Uncle ‘Pole to see me the land. I told him if he would give me a deed for both places, the Calv Pig, that is the 24 acre piece, and the Tom Pig place, the 30 acre piece, I would take them. He told me he would sell me the Calv Pig place, but the Tom Pig place he had promised to let Tom stay on that as long as he lived, that maybe he might redeem it. That about ended the conversation with us. I bought some timber off this land from Tom. Off of the 30 acre piece. I suppose Hagans knew about it. (Plaintiff objects.) I couldn’t say that Hagans saw me hauling the timber, I guess he saw me. (Plaintiff objects.) Hagans never made any objection. I had a conversation with Tom about this land along during that time, when Uncle ‘Pole Hagans first got rid of that Calv Pig place, about 15 years ago. I asked him if he wouldn’t sell his part, and what would he ask for it, (Plaintiff objects). He said he didn’t want to sell it, he expected to redeem it sometime. Last Fall I told him if he expected to get that mortgage he had better attend to it. He said he had boys in Norfolk, who would take it up; that he had confidence in Will Hagans. That if his boys let it slip out after he died, they could. (Plaintiff objects.)

Jones’ explanation of Tom Artis’ nickname is unsatisfying. “Pig” from “Diggs”? In fact, Thomas and Calvin Artis took their name from their father, an enslaved man, who was called “Simon Pig.” Artis was the surname of their mother Celia, a free woman of color. Though I have found no other record that he was manumitted prior to Emancipation, Simon Pig Artis is listed as the head of his household in the 1860 census of Davis township, Wayne County. He reported (or was attributed with) $800 of real property and $430 of personal property. The land was almost surely his wife Celia’s; she is one of the earliest free colored property owners appearing in Wayne County deed books. 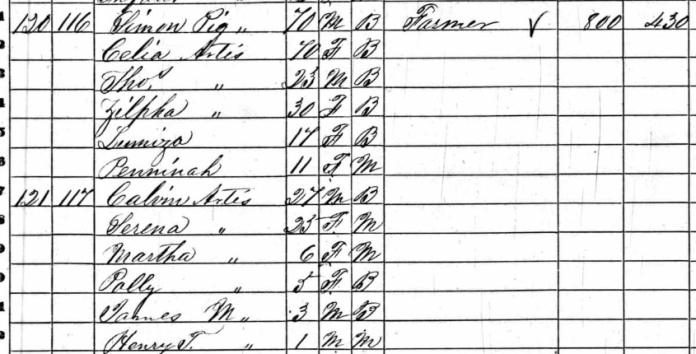 Diggs, on the other hand, while a family surname, was that of Frances Artis Diggs, daughter of Tom and Calv’s oldest sister, Eliza Artis. Frances married Wilson (or William) Diggs in 1868 in Wayne County. (Two of Frances and Wilson’s granddaughters, Etta and Minnie Diggs, married a son, William M., and a grandson, Leslie, of Adam T. Artis. As discussed here, Adam and Celia Artis were not meaningfully related.)