I happened to be in Wilson when the news came. Cousin Zeke had passed peacefully at the age of 97. 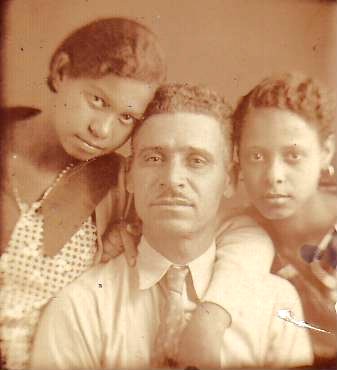 Cousin Zeke at right, with sister Bessie and their father Jack, circa late 1920s.

Alice “Zeke” Henderson Mabin was born 22 January 1920 in Wilson to Jesse “Jack” Henderson and Pauline Artis Henderson. Despite their ten-year age gap, she and my grandmother were close pals in the years before Zeke relocated to Norfolk, Virginia — where she met husband Joseph W. Mabin — and eventually Baltimore, Maryland.

Cousin Zeke in front of the family’s home on East Vance Street in the early 1940s, with sister Doris Henderson Ward behind.

Cousin Zeke returned to Wilson four years ago as her health began to fail. She had no children, but was well-loved by her many nieces, nephews and cousins.

Right to left: Cousin Zeke, her husband Joe, and her sisters Bessie Henderson Smith and Mildred Henderson Hall in Mildred’s den on Queen Street in Wilson.

Sisters Zeke and Bessie on their sister Mildred’s porch, 1986.