My mother: Tell Lisa about that thing you were telling me about your step-grandfather. Mr. Hart.

Mother: And what he brought you.

Grandmother: He had it in his pocket. [We laugh.] He had it in his pocket. And, oh, they were called game chickens. And they got great big bodies and long necks and their heads were small. You know, they’re funny-looking, but they’re very productive. You know, they lay a lot of eggs. And he had all kinds of stuff like that. He was a lawyer, really. But he did real estate, and he farmed. But anyway, he gave me this chick, and it was a hen. And she laid eggs and everything. And so Mama sat the eggs, sat her on her own eggs, and she hatched this little group of chickens, you know. And I don’t know why it was separate from any other ‘cause Mama had chickens and all. She had chickens then, but anyway this chicken was separate from the chickens, and it was ‘round on the side of our house. And the house wasn’t, you know, where you cover the bottom of the house. It wasn’t –

Grandmother: Yeah. And right there where she was there was none, and she made a little coop for her and her chicks. They would run around, but they would come back to that thing ‘cause she was in there. And one day a dog came along and was messing with the chickens, and oh, this hen was just a-jumping up and screaming and carrying on and stuck her head out the thing, and the dog bit her head off. Lisa, I nearly died. And you know, Mama wouldn’t cook her. We wouldn’t have eaten her nohow.

Me: Did she have a name?

Every day she needed, had to eat some fish.  ‘Cause she couldn’t eat pork.  Good as she loved ham and stuff, and Papa always raised a pig every year.  She had a bad heart.  And so she wasn’t supposed to eat no pork.  And so that’s what she had, fish.  Fish and beef.  Fish and beef. … Well, she raised chickens.  But she got to put the chicken in a coop.  Even if it was running ‘round out there in a bigger pen.  She put it one of them little coop places where was built up like that, and let it stay a week, cleaning it out.  That’s what she said to do.  I reckon you let ‘em run ‘round in the yard eating dirt, so she was gon clean ‘em out. She would get her about five or six biddies out the bunch, and she just put them in that coop, and by them being out there in the back yard fenced in that part, picking up all the gravel and everything else they want … Put ‘em in that coop, let ‘em stay a week, clean ‘em out.  So, I said to Mama, “Why you got to take ‘em out the yard and put ‘em in a pen?  And then feed ‘em nothing but corn in there?”  She said that cleans ‘em out.  At the time, when she was telling me, I didn’t know what cleaning ‘em out was.  Wonder, “Why she talking ‘bout cleaning ‘em out?”  I wanted to ask her again, but she would scold at you.  She done called herself telling you what to do.  But she didn’t tell you the whole thing.  So I’d just hush.  And then go and try to get it out of somebody else.

She weighed 200 pounds.  She was fat.  But she wore dresses longer than what they’re wearing now.  Just like, that one up there, that skirt she had on, she made that.  And she, it was blue silk.  And then she made a ruffle, that ruffle that was ‘round that skirt, she took and sewed all ‘round it…. Her hair was shoulder-length, but she always rolled it, always turned it up and pinned it back there and had this part that come around.  She didn’t never cut it real short.  And it didn’t, I don’t never remember seeing it when it was real long.  But she was always tucking it in and trying to make a ball back there. 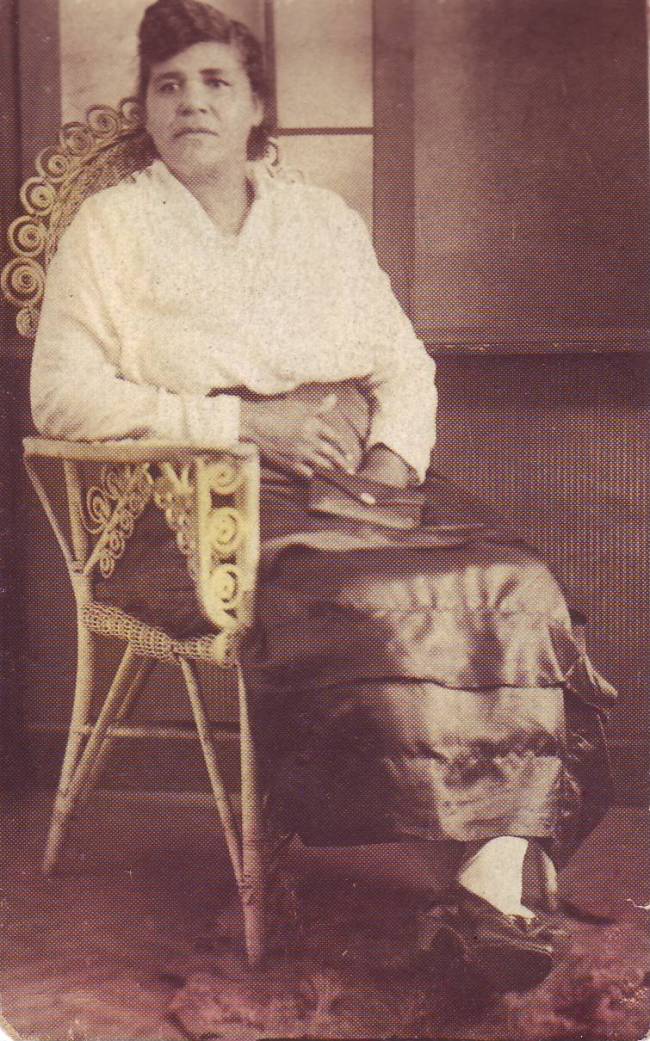 She didn’t have but one child.  But she raised 13.  Papa’s children, and then my mama Bessie and Jack, and me and Mamie.  Her own child was named Hattie Mae, too.