On 30 Jan 1905, in Statesville, North Carolina, my great-great-grandfather John W. Colvert married Adeline Hampton.  The marriage was performed by J.H. Pressley, the same Presbyterian minister who would marry John’s son Lon and Caroline McNeely a year later.  John and Adeline had had four daughters together. Selma Eugenia, Ida Mae, Lillie Mae and Henrietta were born between 1889 and 1893, and I don’t know what kept John and Addie from marrying for so long — or finally induced them to tie the knot. Separate or apart, I’ve found none in the 1900 census.

Addie’s whole family, in fact, is elusive in enumeration records. Her marriage license and death certificate reveal that she was born about 1864 in Wilkes County, North Carolina — northwest of Iredell — to Horace and Myra Hampton. (Other death certificates report Myra’s maiden name as Russell.) In the 1880 census of Wilkes, Addie appears in Wilkesboro township with her parents, younger siblings Vance, Josephine and Henry, and nephews and niece Arthur, Horace and Emma Hampton. Ten years earlier, however, in the 1870 census, Horace and Myra cannot be found, and Addie seems to be living in a household headed by much older siblings.

The 1890 census has perished, but Horace Hampton, “the veteran bridge keeper,” appears in a brief congratulatory article in the Wilkesboro Chronicle on the prosperity and good behavior of the county’s colored people.

Unfortunately, the family’s next mention is an obituary for Myra Hampton, which reveals a surprising number of siblings for Addie. Most of the children were adults before Emancipation, thus do not appear in census records with their parents. Also, though Myra’s age is given as “about 80,” the 1880 census suggests that she was closer to 70 at the time of her death.

Just over a year later, the Chronicle mocked Horace Hampton’s efforts to reclaim his position as bridge tender on the Yadkin River.

In June 1905, less than six months after his next-to-youngest daughter finally married the father of her children, Horace Hampton passed away. 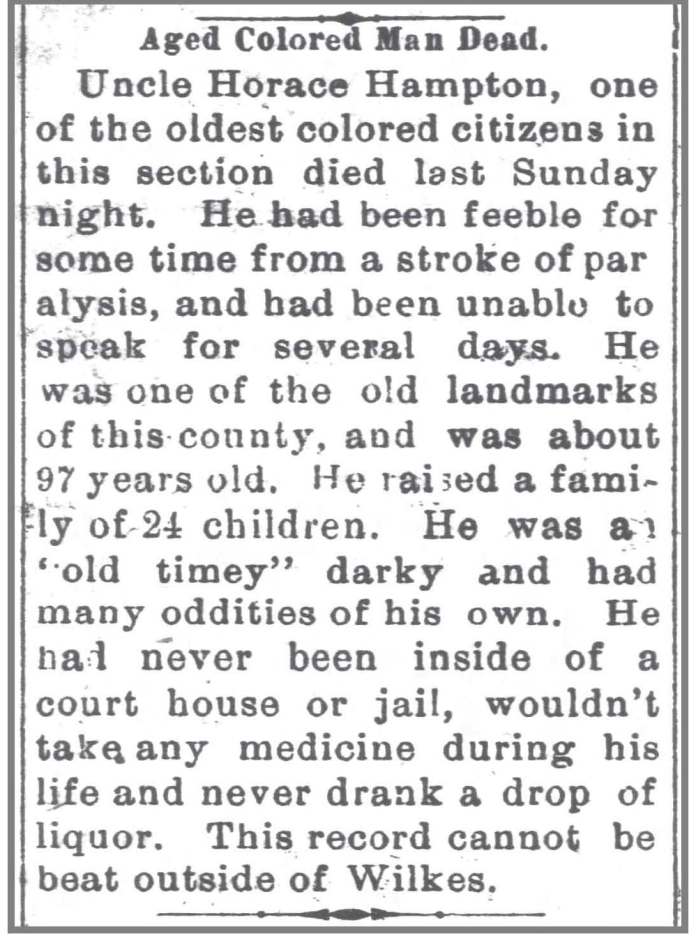 Adeline “Addie” Hampton Colvert outlived her husband by almost 20 years. She is buried next to him in Green Street cemetery in Statesville.

Cardinal direction can be difficult to gauge on a peninsula, but you leave my late grandmother’s house in Newport News headed west (I think) on 35th Street. After a couple of blocks, you’ll cross Chestnut Avenue, and the street becomes Shell Road. You are now in Hampton, and a cemetery is on your left. Don’t turn at the entry to the first part — that’s white. Go down a little further to the second — Pleasant Shade.

Pleasant Shade is, according to founder James East’s headstone, “the first cemetery to be operated and controlled by colored people in Tidewater Va.” My mother’s parents, John C. Allen jr. and Margaret Colvert Allen; her paternal grandparents, John C. Allen Sr. and Mary Holmes Allen; and her aunt Marion Allen Lomans are buried there.

I have never seen it looking wild (though it often feels desolate), but Pleasant Shade’s condition warranted the formation in 2011 of a restoration group. Its website mentions my great-grandfather John C. Allen Sr. among notable burials. Even had it not, I obviously need to contribute. 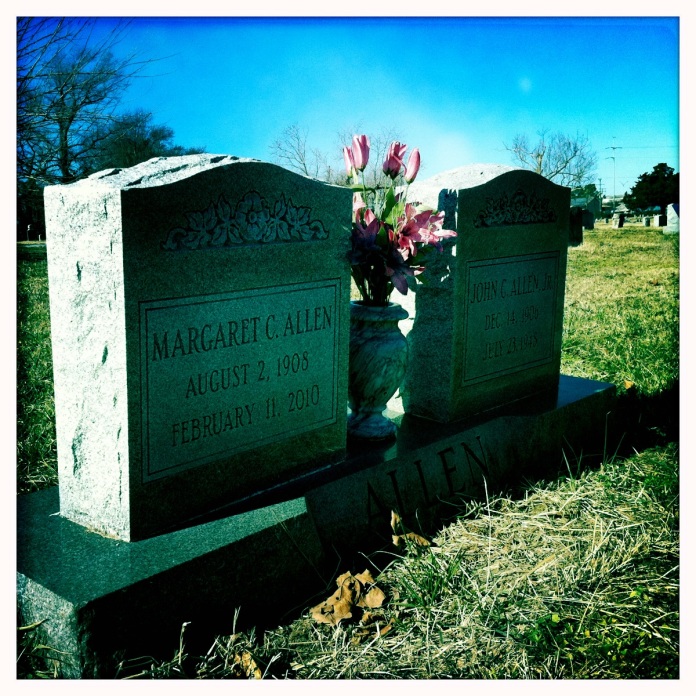 Iredell County, North Carolina, was settled in the mid-eighteenth century largely by Scots-Irish and German immigrants pushing down the spine of the Shenandoah Valley from the mid-Atlantic colonies. Interspersed among them, of course, were the omnipresent English, but also here and there a Dutch family. Such were the Van Pools, who settled first in Maryland before heading south in the mid-18th century.

Ancestry DNA estimates D.F.M. as my 5th-8th cousin. I would not have noticed her name among my hundreds of distant matches, but Shared Ancestor Hint — a comparison of family trees, and Ancestry’s best feature — brought her into sharp focus. To be precise, we are fifth cousins, once removed, both descendants of John Van Pool and his wife, Elizabeth Peyster Van Pool. I am descended from daughter Nancy Van Pool, who married Samuel McNeely, and D.F.M. from son David Van Pool. Nancy and Samuel McNeely’s son John W. McNeely fathered Henry W. McNeely, my maternal grandmother’s maternal grandfather.

Ancestry also estimates L.B. as my 5th-8th cousin, and I found him, too, via Shared Ancestor Hint. We are in fact 7th cousins, descended an equal number of generations from Jacob Van Pool and Elizabeth Hampton via sons John Van Pool and Henry Van Pool.