We drove up from Wilson to Soul City a few times in the mid-1970s, when my mother’s brother Charles C. Allen was city planner for the project. My memories are fleeting: the iconic Soul City sign, a scattering of house trailers, a large white “plantation house” cum operations center, and tick-infested fields. I was maybe 10 or 11; I wasn’t paying attention. We didn’t know it at the time, but we had another family link to Soul City. Floyd McKissick’s wife, Evelyn Williams McKissick, was the granddaughter of Mathew W. Aldridge and niece of my grandmother’s cousins Mamie Aldridge Rochelle and Fannie Aldridge Randolph.

This Day in North Carolina History

A 1970 U.S. Department of Housing and Urban Development advertisement for Soul City.

The Soul City project sought to improve the economic prospects of underprivileged African Americans by providing them with affordable housing and creating an alternative to urban slums. Warren County was chosen for the project because it was one of the poorest areas in the state.

McKissick, the driving force behind the project, was the first African American man to go to law school at the University of North Carolina and thought that economic power was the first step to political freedom. The project received several million dollars in support from the state and federal government, as well as from private donors. 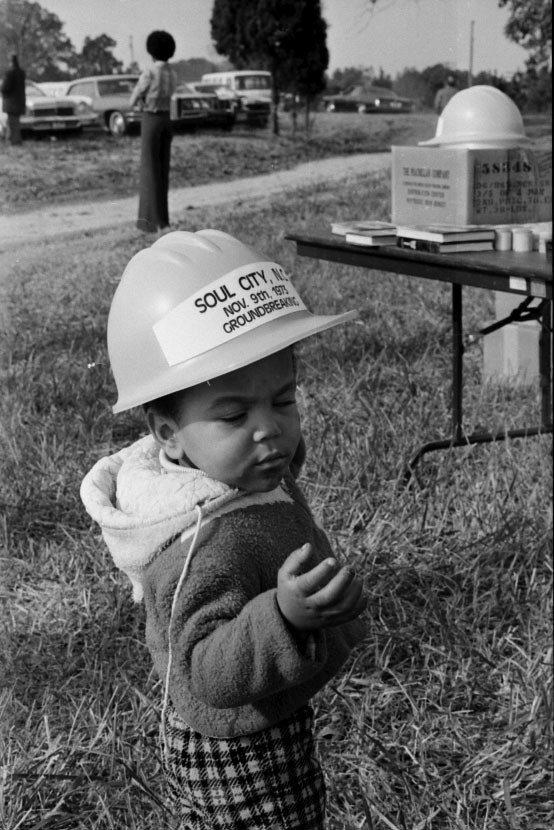 A child at the 1973 groundbreaking. Image from the State Archives and copyright the Raleigh News & Observer