Both of my grandfathers died long before I was born. In 1958, however, my paternal grandmother married Jonah Catellus Ricks and moved to Philadelphia with him. He died just before I turned three, but I am told I was fiercely attached to him. 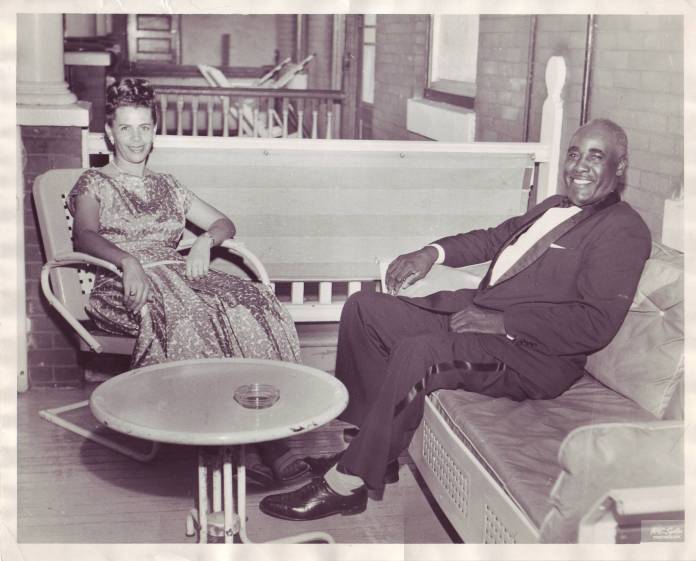 Among the cache of funeral programs my grandmother left is a trove memorializing services for Granddaddy Ricks’ people, many of whom migrated to Philadelphia with him. His father, Jonah Lewis Ricks, lived in Philly for a time, but returned to North Carolina in late adulthood and died in Wilson in 1960.

Jonah L. Ricks was born near Bailey, Nash County, in 1885. His mother, Nancy Jones Ricks, was born about 1865 in western Wilson County to Jacob and Milly Powell Jones, both born into free families of color. (Jacob was a grandson of Bethana Jones.) Jonah’s father was Joseph Ricks.

What follows is a summary of research I conducted to pierce the veil of slavery and shed light on Joseph Ricks’ family just before and after Emancipation.

Initially, I was unable to find either Joseph Ricks or his parents in the 1870 and 1880 censuses. However, I had found a Kinchen R. Ricks (1858-1915) whose Nash County death certificate listed his parents as Squire Ricks and Nicie Braswell, so I looked for him instead. In the 1880 census of Jackson township, Nash County, 22 year-old Kenchin Ricks appears as a servant in the household of Marmaduke Ricks. Next door is this household: Sqare Perry, wife Nicy, and their children, including 18 year-old Joseph. I went back ten years to 1870 to find, in Chesterfield township, Nash County: Esqire Perry, 52, wife Nicey, 47, and children Primus, 22, Willie, 18, Mary J., 16, Rebecca, 13, Kinchen, 11, Joseph, 9, Robert, 8, and Matilda, 6. Also sharing the household were Judy Finch, 19, and her 7 month-old Nancy, and Sham Freeman, 63, Silva, 58, Mary, 25, and Rosa Freeman, 18. Thus I determined that Joseph Ricks was known as Joseph Perry as a child.  His parents were known as Squire and Nicey Perry and, I later determined, all of his siblings except brother Kinchen retained the surname Perry.

Squire Perry was born circa 1815, according to census records. His wife Nicey was born circa 1824. As neither appears in censuses earlier than 1870, I assumed that both were born slaves. I consulted Timothy Rackley’s volumes on Nash County estate divisions and slave cohabitations and discovered records of the division of the estate of Clabourn Finch, which was conducted 18 December 1849.  Finch’s property, which included slaves Jacob, Benjamin, Squire, Sam, Henry, Gilbert, Adam, Primus, and Nicy and her child, was divided among his heirs.  Squire, valued at $550, went to Finch’s daughter Betsy and her husband Jacob Strickland.  Nicy and child, valued at $700, went to Finch’s daughter Nicy and her husband Marmaduke Ricks. Thus, the family was divided during the last decade and a half of slavery.

Page from the estate of Clabourn Finch, Nash County, 1849. The enslaved people distributed to his heirs at November Term of court differ slightly from those listed in this inventory.

Among post-Emancipation Nash County cohabitation records, I discovered that, on 19 August 1866, Esquire Strickland and Nicey Ricks registered their 22-year marriage with a Nash County Justice of the Peace.  At the time they reunited, each was using the surname of his or her most recent former owner. By the 1870 census, however, as noted above, Squire had settled upon Perry.

It is probably not coincidence that another of Clabourn Finch’s daughters, Ann C., was married to a Perry. Clabourn Finch’s slaves were divided among his children at his death and may have been further sold or traded within the family. At present, Squire’s reason for choosing Perry rather than Ricks or Strickland is not clear, nor is the basis for Joseph Ricks’ report on his brother Kinchen’s death certificate that their mother’s maiden was Braswell. Similarly, the reason that two of their sons, Kinchen and Joseph, reverted to Ricks is unclear. 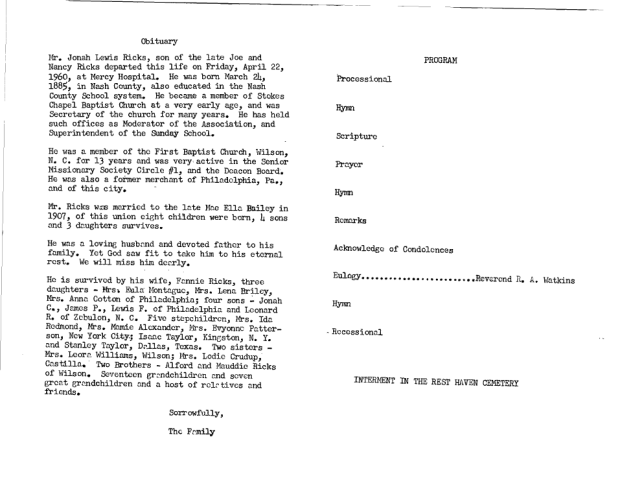