Eons ago, one of the first documents I found related to my great-great-great-grandfather John Wilson McNeely‘s family was an 1828 obituary for his brother David C. McNeely, a student at Yale College. 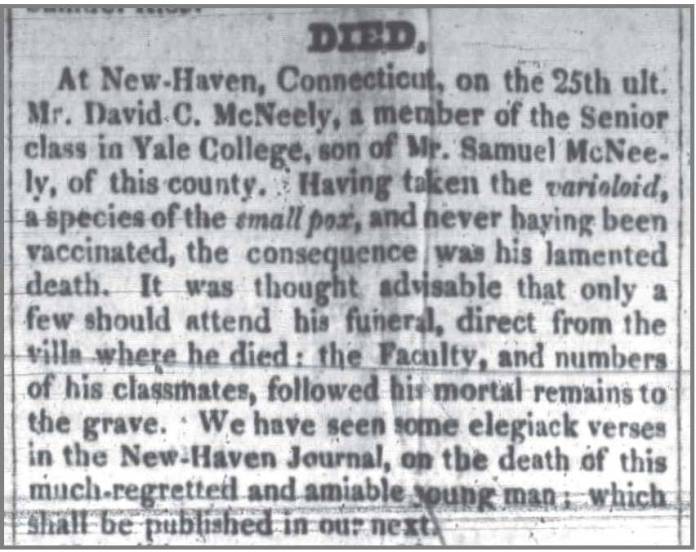 Wow, I marveled. There could not have been many Scotch-Irishmen from the backwoods of Piedmont North Carolina studying at Yale at that time.  What a terrible loss this must have been for John and his family. I entered David’s name into my Family Tree Maker tree alongside Samuel McNeely’s other children William and Acenith (or Acintha).

And then the other day, I found this:

Oh. … Okay. … So all my sentiments hold — except the loss to John. David was not Samuel McNeely‘s son after all, but James McNeely’s.

If there was one James McNeely in Rowan County in the first quarter of the 19th century, there were a dozen, and I have been singularly unsuccessful at teasing apart and differentiating them. Evidence shows that Samuel and his son John W. had close relationships with several James. However, the will of Samuel’s father John McNeely (1724-1801) lists no heir named James, only John, Alexander and Samuel and their sister Ellinor McNeely Bell. It is past time that I pull together a chart or a list or a something that summarizes links I’ve found among these McNeelys and may reveal previously unnoticed clues.