So, the conversation started with talk of Bill Bailey’s barbecue joint. Which was also a dance hall.  Which, though it was right up the road, was, as my grandmother put it, “strictly off-limits” to her and her sisters. “We couldn’t stand him,” she said, because “he did everything illegal and got away with it.” He had a great big stomach and was “trashy,” but his steaks pulled the best of Iredell County’s partying white folks.  And he was married to my grandmother’s Aunt Bert.

Me:  Now, she wound up … She shot somebody, or something, didn’t she?

My grandmother:  Yeah, she shot somebody.  She shot a white man.

My grandmother:  I don’t know what he did to her.  But maybe … seems like to me he kicked her.

My grandmother:  And she shot him.

When I wrote about this before, I was looking for newspaper coverage of the incident, thinking that a black woman shooting a white man in North Carolina in 1944 had to have galvanized the public. Well, sure enough, the Statesville Record & Landmark covered every step of ensuing criminal trial, though in a considerably less salacious manner than I might have expected.  The headlines pretty much tell the tale:

Warren Holding Own, But Will Not Be Out of Danger For Week.  30 March.

James L. Warren Is Better But Not Yet Out of Danger.  6 Apr.

Warren Removed to the Naval Hospital at Portsmouth, Va.  1 May.

Judge Bobbitt to Superior Court Preside August, Case of Mae (Bailey) Murdock Will Not Be Tried At This Term.  29 July 1944.

Prosecuting Witness May Not Visit Scene of Shooting. 9 October.

Aunt Bert served her time at the state women’s prison in Raleigh and returned to Statesville after to pass her few remaining years.  She had  possessed considerable wealth after her father’s death in 1929, but lost much of it while she was away. My family maintains that William “Bill Bailey” Murdock had entrusted whites to help hide his shady assets, and they betrayed him after Bert shot one of their own.

Bert died in 1955. The Landmark ran her death notice without comment or reference to the incident for which she had been infamous just ten years earlier. 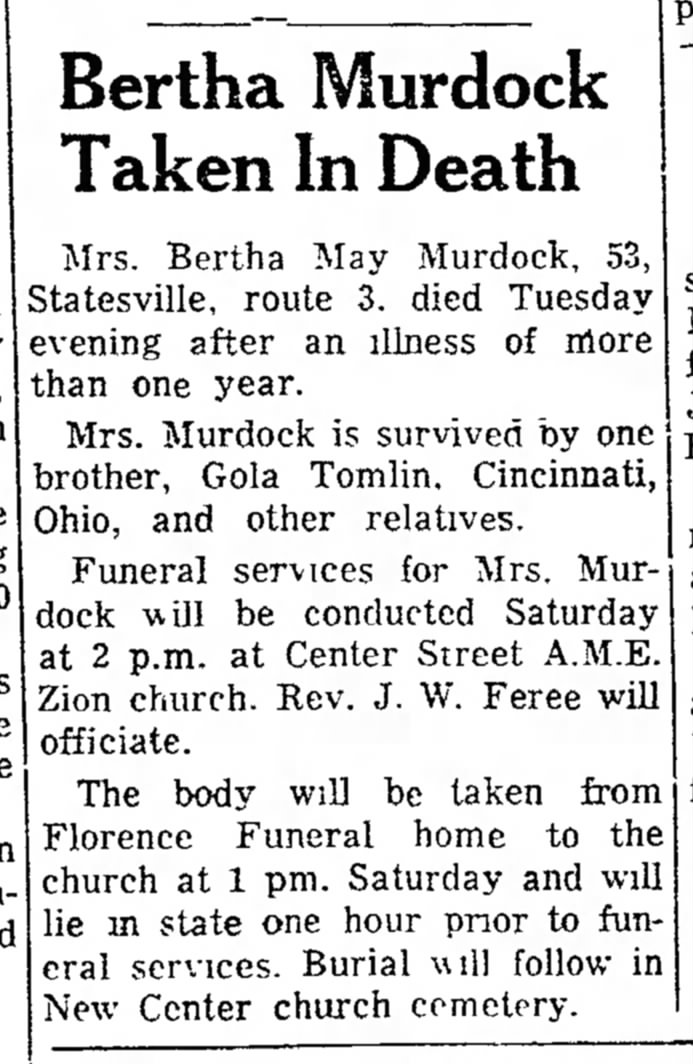 4 thoughts on “Aunt Bert, as reported.”