A coroner’s inquest is an official inquiry into the manner and cause of an individual’s death. Conducted by a county coroner when a cause of death is unknown, violent or otherwise suspicious, this legal inquiry is performed in public and often before a jury. The coroner does not establish why a death occurred, but rather determines who the deceased was and how, when and where death occurred. Here’s a link to a post about coroner’s reports in the North Carolina State Archives, where I obtained the documents below.

I searched Iredell County’s reports looking, in particular, for the inquest into the death of my great-grandmother’s sister, Elizabeth McNeely Kilpatrick Long, who burned to death in a suspicious fire. I was disappointed not to find one. However, I did find these for two men who died unexpected, but ultimately natural, deaths: 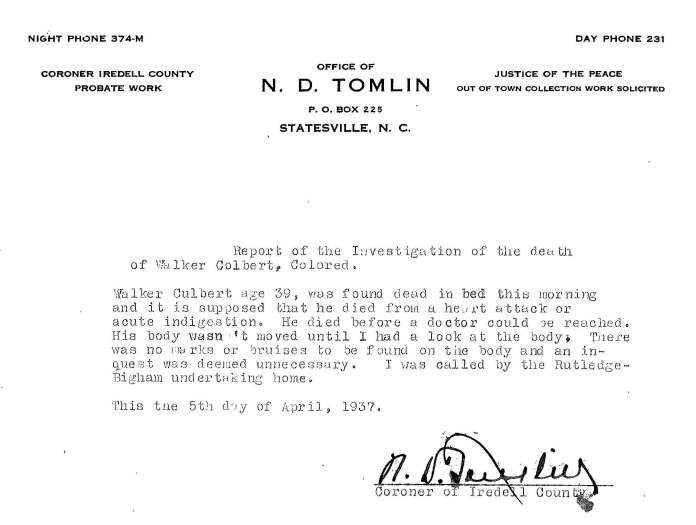 My grandmother’s half-brother, John Walker Colvert II. (One would expect an inquest to get the spelling of a surname right. Or at least consistently wrong.) Here’s his obituary in the 16 April 1937 edition of the Statesville Record & Landmark.

(“Schoolmate”??? Simonton Sanitary Shop? This obituary sets forth some interesting facts that I intend to explore elsewhere.)

And then there was the notorious William “Bill Bailey” Murdock, husband of my grandmother’s aunt Bertha Hart Murdock. He died just over a year after her conviction for shooting a white man in the leg in their restaurant. 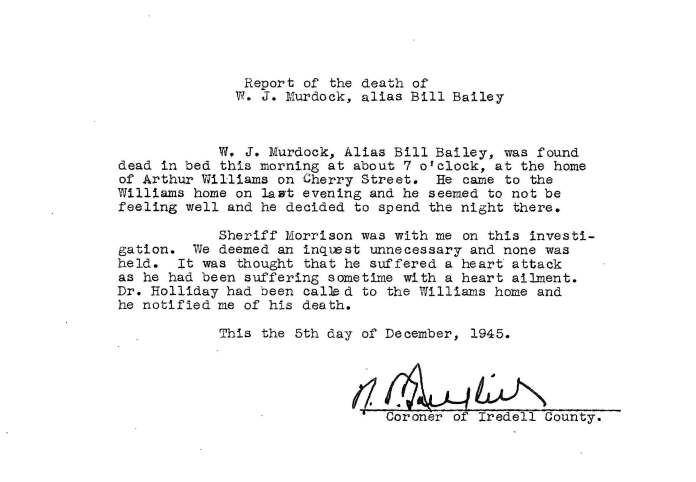