Lizzie E. Hagans — (1) to my beloved husband Will S. Hagans and his heirs in fee simple my house and lot in the town of Goldsboro, situated on Oak Street between West Center and James Streets and known as 104 West Oak Street; (2) to my husband $5000 with all benefits from life insurance policy #190279, Phoenix Mutual Life Insurance Company; (3) Will S. Hagans appointed executor. Signed 5 August 1904 in the presence of H[enry] S. Reid and J.A. Dees.

On 2 May 1917, C[larence] Dillard and J. Peele swore that they were knew Lizzie Hagans for a number of years, were well-acquainted with her handwriting and verified her signature. Henry S. Reid also swore that he witnessed the will, which was recorded and filed on 3 May 1917. 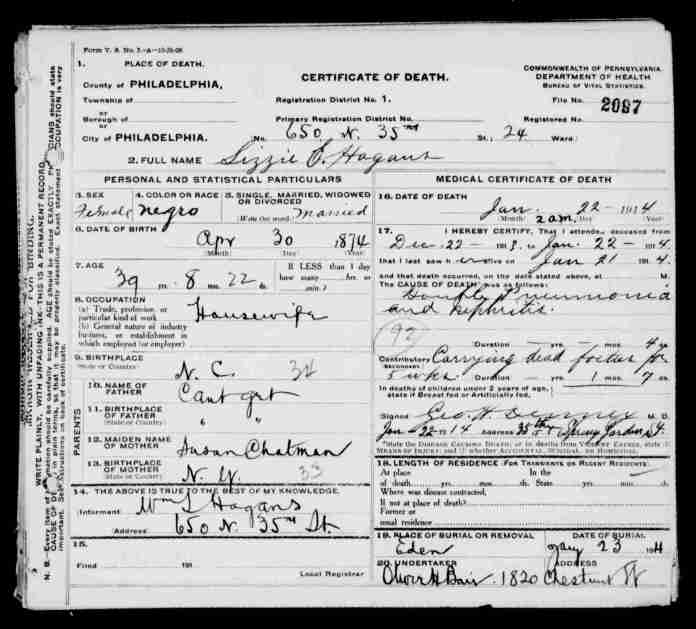 Adam T. Artis — (1) S.S. Strother appointed executor; (2) a decent burial suitable to the wishes of my family and friends; (3) to my wife Katie Artis, all of the Thompson tract on which I now live, about 18 acres, all household and kitchen furniture and personal property; (4) to son Pinkney Artis, $100; (5) to son June Scott Artis, $10; (6) to son Henry Artis, $10: (7) to son Columbus Artis, $10; (8) to son William Artis, $5; (9) to son Walter Artis, $5; (10) to daughter Josephine A. Sherard, $15; (11) to son Robert Artis, $5; (12) sell the balance of my land to pay out the above, then divide the remaining in equal shares among my children Vicey Aldridge, Liza Evert, Augustus K. Artis, Georgana Reid, Mary Jane Artis, , Ida Reid, Lillie Thompson, Napoleon Artis, Haywood Artis, Addie Artis, Annie Artis, Alberta Artis, and Jesse Artis, and, at Katie’s death, property to be divided among the twelve heirs above whose gifts are not limited. Signed with an X in the presence of W.F. Lewis, J.J. Coley and J.E. Exum. Codicil: (13) to son Noah Artis, $10.

Adam Artis’ will includes the names of 23 of his children. Emma’s name is crossed out because she died before the terms of the will could be carried out. Known children whose names do not appear include Cain Artis, who died in 1917; Caroline Artis Coley and Louetta Artis, who presumably died before the will was made; Adam Artis Jr., who seems to have been very much alive in Washington DC. (Was the omission of his name inadvertent, as with Noah?) Despite newspaper reports claiming that Adam  fathered 47 “legitimate” children, these 27 are all I have been able to identify. Though there were doubtless others who died in childhood, I doubt there were 20 of them, and I am fairly certain that no other children reached adulthood.

Mathew Aldridge — (1) to daughters Fannie B. Randolph and Mamie J. Aldridge, 1/2 undivided interest in my dwelling house and lot on Pine Street. Signed 27 August 1919 in the presence of N.D. White and Ida Darden.

Recorded and filed 18 May 1920. Fannie Aldridge was qualified as administratrix. 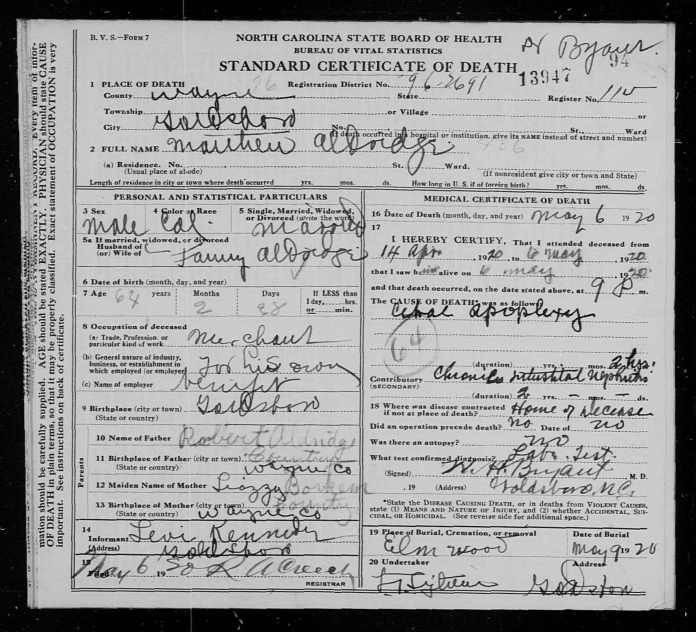 Hmmm. Mathew Aldridge’s will provided for neither his wife, Fannie Kennedy Aldridge, nor his oldest daughter, Daisy Aldridge Williams. Perhaps he had settled property upon them prior to making his will.

Lucian Henderson — to John Wesley Carter, all my real estate known as my home place, 8 acres, provided that John W. Carter care for me and my wife Susan Henderson, otherwise null and void. My trusty friend John W. Carter appointed executor. Signed with an X in the presence of Everest Lewis and R.E. Simmons.

Lucian and Susan Henderson’s only child, Cora Q., died in 1907. For more re his friendship with John W. Carter, nephew of his sister Sarah’s husband Jesse A. Jacobs, see here.

Joseph Aldridge — (1) a decent burial; (2) to my wife Martha C. Aldridge, all my real and personal property during her lifetime or widowhood; (3) to my sons Allen Aldridge, Daniel Aldridge, William Aldridge and Milford Aldridge, $1 each, to my son Joseph Aldridge, my watch, to my son George Aldridge, my clock; (4) after Martha’s death, all my personal property to be divided between my sons Joseph and George and my daughters Mary Aldridge, Luella Aldridge and Lillie Mae Aldridge; as tenants i common, Mary, Luella and Lillie Mae to receive 12 acres to be laid out of the someplace on the east side of the old stagecoach road; to Joseph and George, all the remainder of the land between what I received from the estate of my father Robert and my brothers George and Dave. Signed 5 May 1934.

Martha Hawkins Henderson Aldridge remarried in 1940, triggering the terms of paragraph 4 of the will. As set forth here, she remained close to Joseph Aldridge’s children the remainder of her life. Also, a small clue I hadn’t noticed before: Joseph indicated that he received land from the estate of his brother Dave. As noted here, I had lost sight of David Sloan Aldridge after 1904, but now know that he died before 1934.