John Walker Stockton was the oldest son of Eugene and Ida May Colvert Stockton, who named him for his grandfather, John Walker Colvert. Born in February 1910, he was just over a year younger than my grandmother and just ten months older than her sister Launie Mae — his first cousins. However, though they lived blocks apart, the families were not close. My grandmother never mentioned him in her recollections and, if he or any of the Stocktons were invited to reunions, they did not come. I was stunned to learn, then, that John Stockton lived until 2000. And he was in Statesville that whole time.

In the 1930 census of Statesville, Iredell County, at 214 Garfield Street (owned and valued at $4000), the census taker found  brick mason Eugene Stockton, 57, wife Ida M., 45, and children John, Lili M., Sara, Alonzo, Winifred, and Eugene Jr. Ten years later, John was working as a hospital orderly and living at 429 Harrison Street with “Lilly” Colvert, 48, and her son George, 23. Though John was described as Lillie Mae’s cousin, he was in fact her nephew. (Ida May named her daughter Lillie Mae Stockton after her sister Lillie Mae Colvert.) Lillie, who worked as a maid, indicated that she had had two years of high school, and George, a hotel bellhop, four. John, to my surprise, had had a year of college. (Where? Johnson C. Smith — where his younger brothers Alonzo and Eugene matriculated? Nearby Livingston? Why did he leave?)

Later that year, John registered for the World War II draft. He was 30 years old; I don’t believe he ever served. 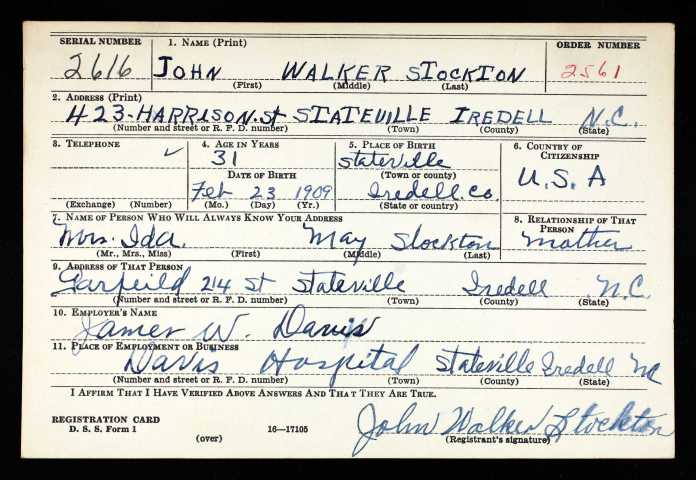 The back of the card noted that he had brown eyes and black hair and a mole on his nose, that he had a dark brown complexion, and that he stood 5’8 1/2″, 157 lbs. (Slighter than I thought. The Colverts were not big people, but I somehow envisioned him taller.) Davis, the hospital at which he worked, is still in operation, but in a different location. The original building, now a moldering wreck, attracts urban explorers and mystery seekers who believe it haunted.

On 1 April 1945, almost exactly a year after “Hero or Heel” was anthologized, John Stockton married Nera Clemons Sharpe, daughter of Hobart and Mary James Sharpe. The couple had no children, but were married 54 years before John’s death and are buried together at Iredell Memorial Gardens.

John Walker Stockton. (I love everything about this photograph.)

2 thoughts on “The things you overcome and master.”