John Walker Stockton was the oldest son of Eugene and Ida May Colvert Stockton, who named him for his grandfather, John Walker Colvert. Born in February 1910, he was just over a year younger than my grandmother and just ten months older than her sister Launie Mae — his first cousins. However, though they lived blocks apart, the families were not close. My grandmother never mentioned him in her recollections and, if he or any of the Stocktons were invited to reunions, they did not come. I was stunned to learn, then, that John Stockton lived until 2000. And he was in Statesville that whole time.

In the 1930 census of Statesville, Iredell County, at 214 Garfield Street (owned and valued at $4000), the census taker found  brick mason Eugene Stockton, 57, wife Ida M., 45, and children John, Lili M., Sara, Alonzo, Winifred, and Eugene Jr. Ten years later, John was working as a hospital orderly and living at 429 Harrison Street with “Lilly” Colvert, 48, and her son George, 23. Though John was described as Lillie Mae’s cousin, he was in fact her nephew. (Ida May named her daughter Lillie Mae Stockton after her sister Lillie Mae Colvert.) Lillie, who worked as a maid, indicated that she had had two years of high school, and George, a hotel bellhop, four. John, to my surprise, had had a year of college. (Where? Johnson C. Smith — where his younger brothers Alonzo and Eugene matriculated? Nearby Livingston? Why did he leave?)

Later that year, John registered for the World War II draft. He was 30 years old; I don’t believe he ever served.

The back of the card noted that he had brown eyes and black hair and a mole on his nose, that he had a dark brown complexion, and that he stood 5’8 1/2″, 157 lbs. (Slighter than I thought. The Colverts were not big people, but I somehow envisioned him taller.) Davis, the hospital at which he worked, is still in operation, but in a different location. The original building, now a moldering wreck, attracts urban explorers and mystery seekers who believe it haunted.

On 1 April 1945, almost exactly a year after “Hero or Heel” was anthologized, John Stockton married Nera Clemons Sharpe, daughter of Hobart and Mary James Sharpe. The couple had no children, but were married 54 years before John’s death and are buried together at Iredell Memorial Gardens.

John Walker Stockton. (I love everything about this photograph.)

From the 1949 yearbook of Johnson C. Smith University, the Bull:

At the end of the sixth row, my grandmother’s first cousin Army-veteran-turned-scholar Eugene Stockton Jr., son of Eugene and Ida Mae Colvert Stockton.

From the university’s 1956 yearbook, another gridiron star: 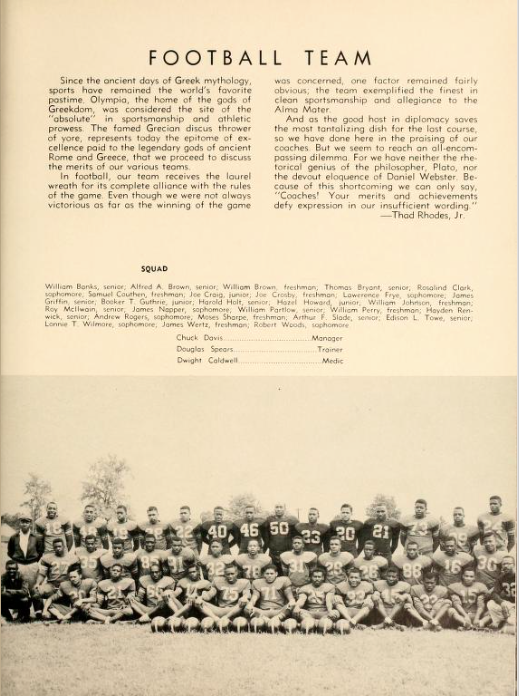 Ancestry.com’s North Carolina Marriages data collection is not through demystifying my kin. A previously unknown marriage license clarified a question I had my great-great-aunt Ida’s life. If Eugene Stockton were her husband, I wondered here, why was she a Stockton in the 1910 and 1920 censuses, but referred to as his sister-in-law? In gaining an answer, I also uncovered a terrible tragedy.

Ida May Colvert‘s first marriage license was so hard to find because she married under her mother’s maiden name, as Ida May Hampton. The license lists her parents as John and Adline Colvert, but they did not marry until 1905, just over a month after Ida married Dillard Stockton on 27 December 1904. (Ida’s age is listed as 21 on the license, which is almost surely too high. Her birth year as recorded in various documents varies widely, but averages about 1885.) Dillard’s parents were listed as Henry and Frances Stockton, which seems to indicate that Dillard and Ida’s second husband Eugene shared a father and were half-brothers. (Eugene’s mother was Alice Allison [or maybe McKee] Stockton.)

Ida was a Stockton Stockton then. But what happened to her first husband, Dillard? A quick Newspapers.com search turned up the awful story:

A little over two years after they married, Dillard Stockton and five other African-American men were crushed by a cascade of soil and scaffolding in a Statesville ditch. [Surely my grandmother knew this story?] 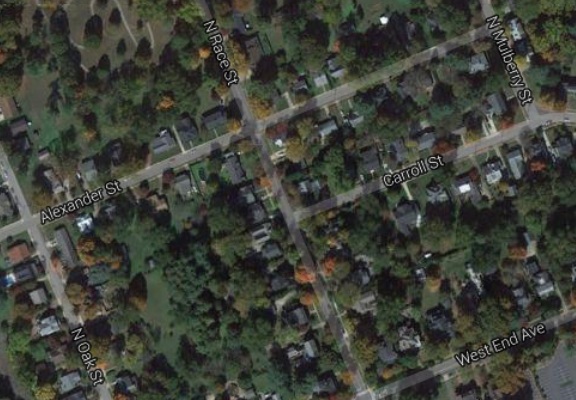 The stretch of Race Street in which the cave-in occurred.

For all the breathless detail of the initial report of the tragedy, greater Statesville soon moved on. As reported in the local paper, within two months, the city had settled four of the deaths with payments of $750 (roughly $19,000 today) and were close to settling with the remaining survivors, including Ida May Colvert. 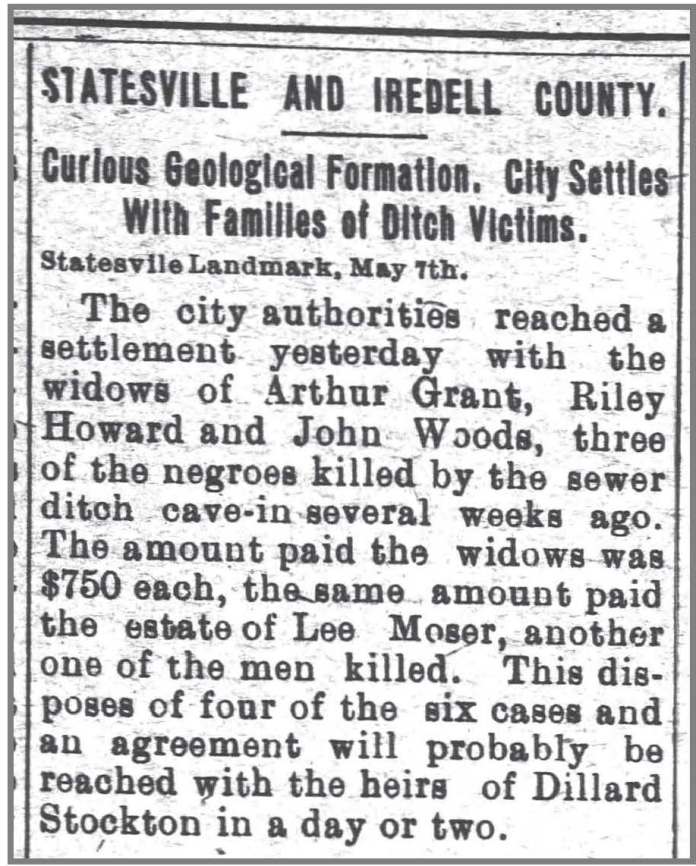 Dillard Stockton is buried in Statesville’s Green Street/Union Grove cemetery. I snagged this photo from findagrave.com. I don’t recall seeing it during my recent visit and don’t know if it’s near the Colvert graves. 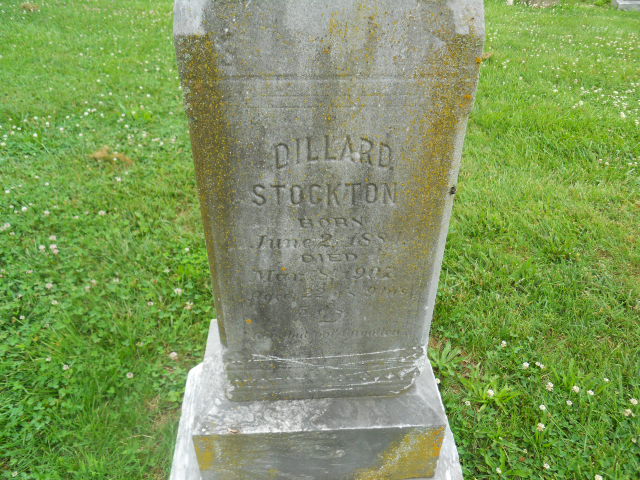 My great-grandfather, Lon W. Colvert, had four half-sisters — Selma, Ida May, Lillie and Henrietta. Selma died of “exhaustion from severe burns” when my grandmother was 8 years old. Ida May and Lillie remained in Statesville all their long lives. My grandmother of course knew them, but there is a disconnect somewhere in there that I can’t quite pinpoint. Why were there no extended Colvert relatives at our early family reunions (when many were still alive), as there were extended McNeely kin? Why didn’t my mother know her grandfather’s people? It is perhaps as simple as my grandmother and her sisters being closer to their mother’s large family in childhood, especially given their father’s relatively early death. Over the years — my grandmother left Statesville for good in 1932 — these patterns persisted, solidified and were passed down. Perhaps. It seems odd to me though. Lon’s sisters were roughly the same age as his oldest set of children, and Ida May’s oldest children were roughly the same age as Lon’s youngest. The families lived in close proximity in south Statesville. What was up….?

I have blogged quite a bit about Henrietta Colvert — the aunt my grandmother knew best — who was one of North Carolina’s early African-American registered nurses. I have tracked Henrietta across the arc of her career, which happened to unfold in my hometown of Wilson, North Carolina, almost 200 miles east of Statesville. She left Wilson sometime after World War II, and I have intermittent glimpses of her whereabouts prior to her death in Roanoke, Virginia, in 1980. What of the other sisters though? I’ll start with Ida May.

Though John W. Colvert and Myra Hampton began their relationship in the late 1880s, they did not marry until 1905. Ida, their first child, was born about 1887, and three more daughters followed in short order. None of the family, however — not John, not Addie, nor their girls — are found in the 1900 census.

A lot happened in the next decade though. The 1910 census of Statesville, Iredell County, at 214 Garfield Street, shows Ida M. Stockton, a 25 (actually, 23ish) year-old widow with one of three children living sharing a household with her brother-in-law Eugene Stockton, 37 and married, her brother-in-law Jesse Stockton, and her son John, 1.  Ida was a laundress, Eugene a tobacco roller at a tobacco factory, and Jesse, an odd job laborer.  This arrangement would not ordinarily raise eyebrows, but — widow?  Wasn’t Eugene Stockton Ida’s husband??? Why is he listed as her brother-in-law?  The birth certificates of all her children, including John, list Eugene as their father. Had Ida previously been married to one of Eugene’s brothers? (Census and death records identify several, including Arthur (born circa 1875), Fred (1885), Jakey (1887), Jesse Lee (1889), and David (1891).) If so, I have not found evidence of a license. And if not Ida, to whom was Eugene married in 1910?

That last question turns out to be pretty easily answered. On 24 June 1903, Eugene Stockton, son of Henry and Alice Stockton, married Ella Cowan, daughter of Peter and Clementine Cowan in Iredell County. I have found no evidence that the couple had any children. In the spring of 1912, their divorce suit, styled Eugene Stockton vs. Ella Stockton, was listed several times in the court calendar published in the Statesville Sentinel. By 1918, when Eugene registered for the World War I draft, he listed his sister Gertrude Stockton as his next of kin.

Nothing had changed by time the enumerator arrived to record the 1920 census. At 214 Garfield Street in Statesville, Eugene Stockton, 46, is listed as the head of a household that included his sister Flossie Tomlin, 23, grandchild Annie L., 5 months, sister-in-law Ida M. Stockton, 33, and grandchildren Lilly M., Sarah E., Alonzo P., and Winnifred.  Eugene was employed as a tobacco factory laborer, Flossie as a teacher, and Ida as a laundress. Who made this up? The census taker, or a self-conscious Ida May? She is still listed as Eugene’s in-law, despite their apparent decade-long relationship, and Lillie, Sarah, Alonzo and Winnifred are identified as his grandchildren.  Eugene’s sister Florence “Flossie” Stockton Tomlin, was married to Harvey Golar Tomlin, who was the half-brother (on the maternal side) of Ida Mae’s half-brother (on the paternal side) Lon W. Colvert.  Accordingly, Annie L. Tomlin was Eugene’s niece, not his granddaughter. (In a separate listing in 1920, in Statesville’s “suburbs”: Jessie Stockton, 28, sister Flossie Tomlin, 25, niece Anna L. Tomlin, 4 months, and brother-in-law Havey Tomlin.)

Finally, as her mother’s had been, Ida May’s steadfastness was rewarded.  On 8 July 1922, Eugene Stockton, 49, son of Henry and Adley Stockton, and Ida May Stockton, 35, daughter of John and Adeline Colvert, were married by Z.A. Dockery, M.G., at “Eugene’s house” before Bessie Abernathy and E.A. Abernathy. 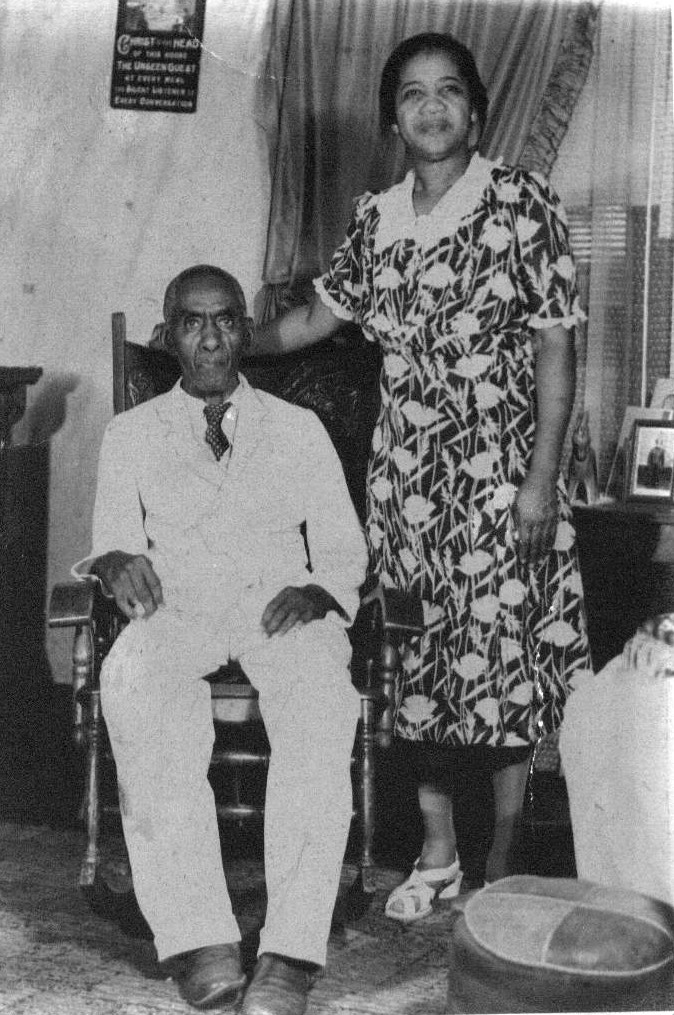 Eugene and Ida May C. Stockton, probably the early 1940s.

Eugene Stockton died 26 February 1944 in Statesville. Ida May Colvert Stockton Stockton outlived him by more than 20 years. On 23 August 1967, she passed away a week after suffering a stroke.

Photo courtesy of A. S. Barton.