A hostler was a groom or stableman employed to care for horses in a stable, often at an inn or hotel.

His name was Prince. And Papa sold Prince when he bought a car. But when he bought Prince, Prince had never been broken in. Nobody’d ever ridden him. And this man broke him in for Papa. But he was still high-spirited, because he was a race horse. And he had four white feet. That is what was so distinctive about him. He was chestnut. And we were so crazy about him that we would go in the – Papa had a big enclosed lot, like, that he could come out in. Other than the stable. And we would go in there with him, but he wouldn’t bother us. He would never bother us. And this old gentleman would be what was called currying. He would curry the horse and brush him and all, and he would hold me up and let me brush it. What was the man’s name? I can see him right now. He was an old man and real light. He was almost white. He had light hair, had white hair. And he loved Mama’s cooking. She used to bake something that was a pie. She called it a pie – but it was sweet potatoes. It was not mashed like you’d make up in a sweet potato pie ‘cause she would slice them and put them in the pie. Then she would make a sauce with nutmeg and lemon juice and thicken it with flour, you know. And then she would cook all of that in a big plate thing like that. And when Papa sold Prince, we went down where the man who had bought him had him, and he would look bad. His skin – you know Papa used to keep him just as slick and pretty. And that man would come to the house and wash him down with soap and water and everything and made him pretty. And he had pretty white feet. But Papa sold him to that man when he bought the car. And we went down there one day to see Prince, and he looked awful. He looked bony. He just looked awful. And we went down a little hill where he was in an enclosure. And we called him, and he came running over there where we were. We were so glad to see him. And we went home and told Papa that Prince said he wanted to come home. Yes, Lord. We wanted Prince moved. 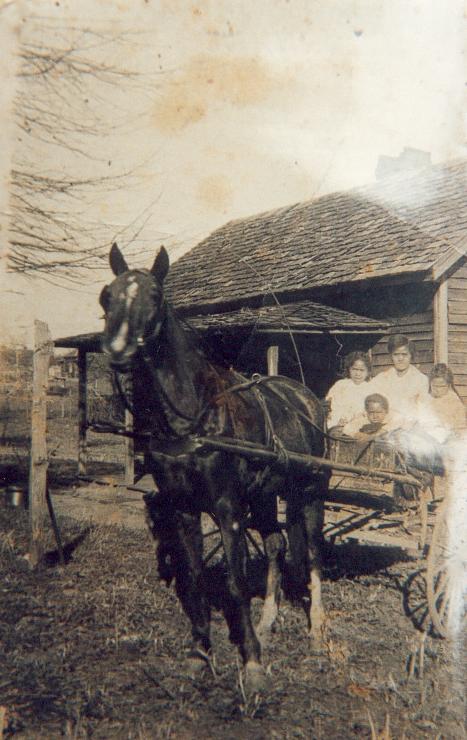 Possibly Prince (though he only has two white feet), circa 1913, with Louise Colvert, Launie Mae Colvert, Bertha Hart and Margaret Colvert.